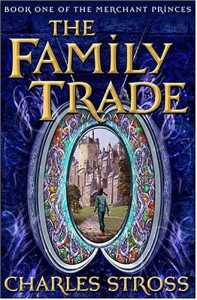 Synopsis of The Family Trade

Best known for his Accelerando novels (Singularity Sky, etc.) of an ever-speedier techno-Singularity, British Author Stross mixes high-tech with medieval trappings in this highly entertaining science fantasy in the "misplaced modern" mode. Reporter Miriam Beckstein, recently fired for exposing a money laundering scheme and threatened by the criminals involved, finds that staring at her mother's antique brooch can move her from contemporary America to a Viking-settled parallel universe, where she discovers her true heritage as a countess among the world-walking, goods-smuggling Clan. Struggling to master the mores and politics of her new family, Miriam discovers trust to be the rarest commodity in which they deal. Earl Roland, her new love, may be too loyal to her uncle, Duke Angbard, while Roland's intended, the Baroness Olga, is much more than a silly heiress waiting to be married off. Miriam schemes to update the Clan's ancient business and make herself invaluable to their interests, before one of the many assassins after her succeeds. Stross makes much of the incongruity of modern technology alongside old-fashioned costumes and customs, and many will be reminded of Roger Zelazny's Amber Books, which had similar dizzying intrigues. Copyright ... Reed Business Information, a division of Reed Elsevier Inc. All rights reserved.

A bold fantasy in the tradition of Roger Zelazny's Chronicles of Amber, The Merchant Princes is a sweeping new Series from the hottest new writer in science fiction!

Miriam Beckstein is happy in her life. She's a successful reporter for a hi-tech magazine in Boston, making good money doing what she loves. When her researcher brings her iron-clad evidence of a money-laundering scheme, Miriam thinks she's found the story of the year. But when she takes it to her editor, she's fired on the spot and gets a death threat from the criminals she has uncovered.

Before the day is over, she's received a locket left by the mother she never knew-the mother who was murdered when she was an infant. Within is a knotwork pattern, which has a hypnotic effect on her. Before she knows it, she's transported herself to a parallel Earth, a world where knights on horseback chase their prey with automatic weapons, and where world-skipping assassins lurk just on the other side of reality - a world where her true family runs things.

The six families of the Clan rule the kingdom of Gruinmarkt from behind the scenes, a mixture of nobility and criminal conspirators whose power to walk between the worlds makes them rich in both. Braids of family loyalty and intermarriage provide a fragile guarantee of peace, but a recently-ended civil war has left the families shaken and suspicious.

Taken in by her mother's people, she becomes the star of the story of the century-as Cinderella without a fairy godmother. As her mother's heir, Miriam is hailed as the prodigal countess Helge Thorold-Hjorth, and feted and feasted. Caught up in schemes and plots centuries in the making, Miriam is surrounded by unlikely allies, forbidden loves, lethal contraband, and, most dangerous of all, her family. Her unexpected return will supercede the claims of other clan members to her mother's fortune and power, and whoever killed her mother will be happy to see her dead, too.

Behind all this lie deeper secrets still, which threaten everyone and everything she has ever known. Patterns of deception and interlocking lies, as intricate as the knotwork between the universes. But Miriam is no one's pawn, and is determined to conquer her new home on her own terms.

Blending the creativity and humor of Roger Zelazny, the adventure of H. Beam Piper and Philip Jose Farmer, and the rigor and scope of a science-fiction writer on the grandest scale, Charles Stross has set a new standard for fantasy epics

Reviews of The Family Trade

Fans of Zelazny's Amber Books and Farmer's World of Tiers novels are very likely to enjoy this new Book, the beginning of a Series. -- Drew Bittner, SFRevu

This is the thinking-person's adventure so many SF and fantasy fans say they wish for. -- T. M. Wagner, SF Reviews.net

The pace is quick, with many unusual twists in the plot, and the story is riveting from the first sentence --- an excellent read! -- Terry Miller Shannon, BookReporter.com

It's an entertaining mix of byzantine plots and parallel world adventure, with an intrepid, strong-willed heroine, and a cliffhanger ending that made me impatient for the sequel. -- Hilary Williamson, Bookloons

... a large part of the fun of this Book derives from what John Clute refers to as "wainscot" fantasy: the notion of a secret society operating within the general culture. -- Paul Witcover, Scifi.com