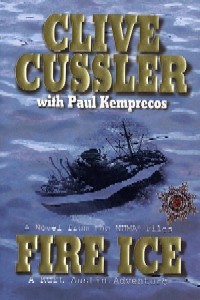 In Serpent, Clive Cussler introduced a hero for the new millennium in Kurt Austin, the leader of NUMA's Special Assignments Team. In previous encounters, Austin and his colleague Joe Zavala have battled eco-extortionists and mad empire builders-but they have never faced a menace like the one before them now.

In the heart of the old Soviet Union, a mining tycoon has proclaimed himself czar of Russia. Claiming Romanov ancestry and backed by billions of dollars, he is determined to overthrow the already shaky Russian government-and U.S. opposition doesn't bother him one bit. A little crisis of their own should distract the Americans for a while, and he knows just the thing...

Filled with all the hair-raising action and endless imagination that are Cussler's hallmarks, Fire Ice is a dazzling thriller from the grandmaster of adventure fiction.

Although Cussler has a knack for writing action-packed adventure, this one fits the mold a bit too well. -- Robert Huey, The Christian Science Monitor

With a title like "Fire Ice," the reader can reasonably expect the story that is alternately fiery and chilling. Instead, Cussler and Kemprecos provide a tale that limps between lukewarm and tepid. -- L.D. Meagher, CNN

FIRE ICE combines the best elements of the James Bond and Tom Swift novels, tossing in a boatload of real science along the way. -- Joe Hartlaub, Bookreporter.com

This intriguing, high-tech adventure has thrills, wit and a dose of testosterone. -- Michael Phillips, Book Magazine

I truthfully couldn't tell the difference in writing styles between Cussler and Kemprecos, which I give them many kudos for - too often I've read Books by a famous Author "with" another Author and they are total crap. -- J.A. Hitchcock, Cinescape