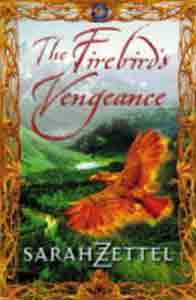 The Firebird's Vengeance : A Novel of Isavalta

Synopsis of The Firebird's Vengeance : A Novel of Isavalta

Magic and the force of destiny propelled Bridget Lederle across the void between worlds, through the Land of Death and Spirit, to the world of Isavalta, where she discovered secrets about herself and her family that had been hidden since before her birth. It seems like only yesterday that a charismatic stranger swept her from her home on the shore of Lake Superior and took her on an impossible journey to a strange, bejeweled world where sorcery could spring from the simplest of patterns, with most serious effect.

In Isavalta she also discovered magical powers she had never suspected she possessed before her transit between the worlds. More than self-knowledge has changed her: she is in love with Sakra, a powerful sorcerer and her staunch ally. And she learns that her daughter, who she thought was lost to her, is alive.

But that daughter is also the pawn in a dangerous game of power and politics. The powerful spells of a ruler intent on conquest threaten to destroy both mother and daughter. Torn between the contending forces of magic and empire, Bridget lives an extraordinary adventure replete with unimaginable dangers. Beset by enemies on all sides, she must rely on the aid of supernatural forces she can't control, lest she be destroyed by a fate she cannot imagine.

Reviews of The Firebird's Vengeance : A Novel of Isavalta

The Firebird's Vengeance, and for that matter the whole of the Isavalta Trilogy, is a triumph for character-driven fantasy. -- Vegar Holmen, The Alien Online