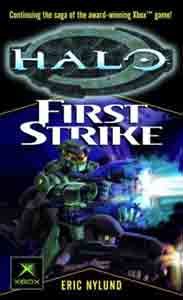 The Human-Covenant war rages on as the alien juggernaut sweeps inexorably toward its final goal: destruction of all human life!

Halo has been destroyed, and the threat it posed to sentient life, neutralized. But victory has come at a terrible cost for the UNSC. Thousands of valiant soldiers fell in the battle to prevent the alien construct from falling into the enemy's clutches.

Now, everything depends on the Spartan known as the ...Master Chief.... Yet even with the aid of the artificial intelligence Cortana, the Master Chief will be hard-pressed to rescue survivors and evade the Covenant ships patrolling the remains of Halo in debris-strewn space.

Ahead lies a dangerous voyage home, through a gauntlet of Covenant forces. For the sake of all, the Master Chief and his war-torn squad must not only survive, but take the fight to the enemy with a decisive first strike.

This novel is based on a Mature-rated video game.

If you're a fan of high tempo Mil-SF, or if you've finished the Halo game and can't wait for the next version to come out, this should be perfect reading to whet your appetite and keep you immersed in the Halo universe. -- Ernest Lilley, SFRevu