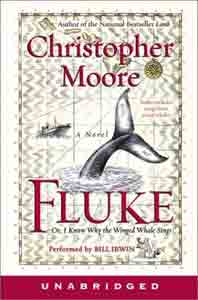 Fluke : Or, I Know Why the Winged Whale Sings

Synopsis of Fluke : Or, I Know Why the Winged Whale Sings

After reverently lambasting the most cherished rites and credos of virtually every one of the world'smajor religions in his transcendently hilarious novel Lamb, the one and only Christopher Moore returns with a wild look at interspecies communication, adventure on the high seas, and an eons-old mystery.

Marine behavioral biologist Nate Quinn is in love -- with the salt air and sun-drenched waters off Maui ... and especially with the majestic ocean-dwelling behemoths that have been bleeping and hooting their haunting music for more than twenty million years. But just why do the humpback whales sing? That's the question that has Nate and his crew poking, charting, recording, and photographing any large marine mammal that crosses their path. Until the extraordinary day when a whale lifts its tail into the air to display a cryptic message spelled out in foot-high letters: Bite me.

No one on Nate's team has ever seen such a thing; not his longtime partner, photographer Clay Demodocus, not their saucy young research assistant, Amy. Not even spliff-puffing white-boy Rastaman, Kona (the former Preston Applebaum of New Jersey), could boast such a sighting in one of his dope-induced hallucinations. And when a roll of film returns from the lab missing the crucial tail shot -- and their research facility is summarily trashed -- Nate realizes that something very fishy indeed is going on.

This, apparently, is big, involving dangerously interested other parties -- competitive researchers, the cutthroat tourist industry, perhaps even the military. The weirdness only gets weirder when a call comes in from Nate's big-bucks benefactor saying that a whale has made contact -- by phone. And it's asking for a hot pastrami and Swiss on rye. Suddenly the answer to the question that has daunted and driven Nate throughout his adult life is within his reach. But it's waiting for him in the form of an amazing adventure beneath the waves, 623 feet down, somewhere off the coast of Chile. And it's not what anyone would think.

It must be said: Christopher Moore's Fluke is a whale of a novel.

Reviews of Fluke : Or, I Know Why the Winged Whale Sings

...if you want to experience the greatest satirist since Jonathan Swift - you just have to read Fluke. -- Mark Graham, Rocky Mountain News

Suffice it to say that if the ghost of Jules Verne had conspired with Rudy Rucker and Tom Robbins to produce a novel, Fluke might very well make them hang their heads in defeat. -- Paul Di Filippo, The Washington Post

Readers new to the work of Christopher Moore will want to know two things about him immediately. First: Where has this guy been hiding? (Answer: In plain sight, since he has a devoted cult following.) Second, and more germane: What is he smoking? -- Janet Maslin, The New York Times

With Fluke: Or, I Know Why the Winged Whale Sings, Christopher Moore has created an enchanting, audacious eco-fantasy liberally laced with both slapstick humour and possible answers to some of the major questions... -- Robert Wiersema, Toronto Globe and Mail

Moore's imagination soars as high in this novel as in any of his previous works. -- Brian Richard Boylan, The Denver Post

Despite the bizarre events that come one after another, and the unusual individuals Nate encounters, the story remains engaging, the characters sympathetic. -- Linda M. Castellitto, Bookpage

Both the Book and Moore are funny --- and there's no fluke about that. -- William Morrow, Bookreporter.com

Like a Saturday night house party featuring the best contraband and no parental supervision, Moore's Books get messy in places, but there's rough and ready wisdom to be found in such unabashed abandon. -- Joe Kurmaskie, The Oregonian

In Fluke, Moore comes up with a completely startling and mind-boggling set of ideas surrounding evolution and cetaceans. The implications provoke yet further speculations on the reader's part, and that's a sign of a truly effective speculative novel. -- Claude Lalumi...re, Infinity Plus