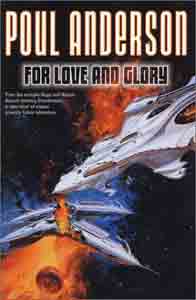 For Love and Glory

Synopsis of For Love and Glory

Mystery, discovery and wonder on a cosmic scale are the core of Anderson's latest novel. Lissa, a human Earth woman, and her partner, ...Karl,... a giant alien academic who resembles a Tyranosauras...are interstellar archaeologists investigating the remote and uncharted planet Jonna. There, they seem to have hit the jackpot. For on that distant world they...ve discovered an immense artifact which may have been left by the mysterious beings called the Forerunners. This race predated all the known cultures in the starfaring galaxy, and had vanished long before any other intelligent species had taken to the stars.

But Lissa and Karl aren't the first to have made the discovery. On the far-off world, the archaeologists cross paths with the two freebooters whose motives towards the arcane object are not purely scientific. Their discovery on Jonna may be the best preserved relic of the ancient beings yet found. Other artifacts from The Forerunners-once reverse engineers-have revolutionized entire fields of technology, reaping huge financial rewards. If the same holds true for this newest discovery, Lissa realizes, only she and Karl stand between the seemingly friendly freebooters and what could be the treasure of a lifetime.

Reviews of For Love and Glory

Fans of the early Andre Norton and Robert Heinlein space operas are going to have a lot of fun reading FOR LOVE OR GLORY. -- Harriet Klausner, BooksNBytes

...even in its high points, there's always something a little bit off. -- Paul Di Filippo, Scifi.com

For Love and Glory is Anderson's last romp in the cosmos, and while fans will find it reassuringly true to form, it doesn't add much to his canon, despite the incorporation of contemporary ideas about longevity and whatnot. -- Ernest Lilley, SFRevu

It is filled with adventure, romance, and the sense of wonder that all too much of modern science fiction is missing. -- William Alan Ritch , Scifi Dimensions

Don't miss out on this final salute of one of the grand masters of Science Fiction. -- GF Willmetts, SFCrowsnest

FOR LOVE AND GLORY is a postumous work and lacks some of the attention to detail that Anderson would certainly have given it had he survived. -- BooksForABuck

Not an enduring classic, but a Book I'm happy to have read. -- Rich Horton, SF Site