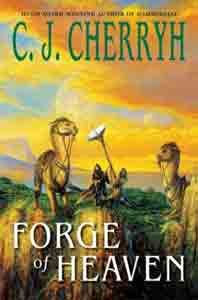 Synopsis of Forge of Heaven

At the far edge of the galaxy, tiny Concord Station holds a unique place in the universe -- the one place where humans from Earth, the strange Outsider worlds, and the extremely powerful, alien ondat all coexist, bound together to the fate of the fragile world below. Scarred by vicious nanotechnology unleashed by the powerful ondat, this lone desert planet acts as the crucible to determine whether there can be peace between the far-spanning empires of the universe, or unending, unstoppable war to rival even the cataclysmic Gene Wars that once devastated untold galaxies.

Born the son of a desert prince, Marak trin Tain knows all too well the knife edge between diplomacy and disaster. Centuries ago he was caught in the battle between the terrorist First Movement and Earth, and the resulting destruction when the ondat sent planet-crushing missiles to prevent contagion from uncontrolled nanotechnology. Now, immortal but not invulnerable, he shepherds the evolving world and its brave inhabitants toward a new future. But this utopia is hardly idyllic, and a journey of discovery becomes one of desperation when a violent act of nature threatens even Marak's own survival.

High above on Concord Station, intrigues andalliances from every faction of Earth and the Outsider colonies fight for influence, while the implacable ondat pursue their own unfathomable goals. In the midst of dangerous collusion, all the watcherProcyon wants is to record the miracles of the planet evolving below, sharing in the undreamed-of wonder of watching a new world grow. But the surprise arrival of a ship from Earth upsets the delicate balance of power on the station, and a deadly attack becomes the opportunity for rebellion. Caught up in a web of danger and intrigue, Procyon will step far beyond his comfortable life into a nightmare of dangers, as plot within plot unravels with disastrous consequences.

For the fate of one man could decide the future of human and alien alike ... and the ondat are watching.

Reviews of Forge of Heaven

Forge of Heaven is as excellent as all her Books, and its focus on gene manipulation is timely and fascinating. -- Hilary Williamson, Bookloons

Fans of cerebral science fiction with numerous concepts to ponder will appreciate this deep look at a cold war on the verge of turning hot. -- Harriet Klausner, AllScifi.com

Cherryh's detailed world-building is fascinating in its own right, like the scenario for a complex computer game, but it dwarfs entirely the story and characters set within it. -- Paul Witcover, Scifi.com