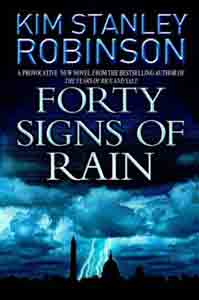 Synopsis of Forty Signs of Rain

When the Arctic ice pack was first measured in the 1950s, it averaged thirty feet thick in midwinter. By the end of the century it was down to fifteen. One August the ice broke. The next year the break-up started in July. The third year, it began in May.That was last year.It's an increasingly steamy summer in America's capital as environmental policy advisor Charlie Quibler cares for his young son, and deals with the frustrating politics of global warming. According to the President and his science advisor Dr S, the weather isn't important! But Charlie must find a way to get a sceptical administration to act before it's too late ... and his progeny find themselves living in Swamp World. Just arrived in Washington to lobby the Senate for aid is an embassy from Khembalung, a sinking island nation in the Bay of Bengal. Charlie's wife Anna, director of bioinformatics at the National Science Foundation and well known for her hyperrational intensity, is entranced by the Khembalis. By contrast, her colleague, Frank Vanderwal, is equally cynical about the Buddhists and the NSF.The profound effect the Khembali ambassador has on both Charlie and Frank could never have been predicted ... unlike the abrupt, catastrophic climate change which is about to transform everything.

Forty Signs of Rain is an unforgettable tale of survival which captures a world where even the innocent pattern of rainfall resounds with the destiny of the biosphere.

Reviews of Forty Signs of Rain

Robinson has written a slow-moving yet absorbing narrative; it's clear he is pacing himself for the long run of a trilogy. -- PD Smith, The Guardian

In short, this is a Book that is well worth your time. -- Niall Harrison, DiverseBooks

Robinson skips between the domestic, scientific and political spheres without missing a beat and delivers a hot-topic page-turner that leaves the reader gasping and stranded at high tide, eager for the next Book from this science fiction master. -- Gavin J. Grant, Bookpage

Robinson puts plenty of science in his science fiction - and makes it exciting enough to ensure that you'll want to come back for more. -- Rick Kleffel, The Agony Column Book Reviews and Commentary

Forty Signs Of Rain's relative shortness renders it far less intimidating and more accessible than, say, the Mars trilogy, and it is a very very highly recommended introduction to Kim Stanley Robinson's work. -- Stuart Carter , [not to be confused with] The Truth

Does Robinson succeed in making bureaucratic inertia exciting? Not quite. But he comes close to making mathematics the stuff of drama. -- Gerald Jonas, The New York Times

At times, Forty Signs of Rain sounds like one side of a philosophical dialogue, and I yearned to hear to whole discussion. -- Claude Lalumi...re, Scifi.com

I have been waiting for some time for a Kim Stanley Robinson Book that I could give an unequivocal recommendation. Forty Signs of Rain is not that Book, but it came very close. -- Cheryl Morgan , Emerald City

Full of phone conversations, board meetings and the internal ruminations of biometricians, the narrative is not what you'd call action packed. That doesn't, however, mean it is boring or lacking in drama -- Michael Berry, The San Francisco Chronicle

hooked and you want to watch the scientific soap opera for just one more episode before you put it down, and hey, all that climate stuff is pretty darn interesting too. -- Ernest Lilley, SFRevu

Volumes 2 and 3 would have to be radically different in their approach to make the overall experience one worth recommending. But I personally have no reason to continue on that particular trip. -- Mervius, Fantastica Daily