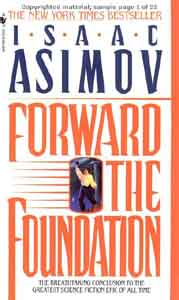 Synopsis of Forward the Foundation

The days of the Empire are numbered. On the Imperial world of Trantor, Cleon II rules over a multitude of worlds slowly descending into anarchy. Two individuals' destinies intertwine in the fight against chaos - Hari Seldon, and Eto Demerzel, a robot and the real power behind Cleon's throne.

Reviews of Forward the Foundation

A perfect close to a magnificent career. -- Alfvaen, The Den of Ubiquity

I would have to rate this as one of the better Books in the Foundation Series, largely because of the insights it gives into Asimov himself and his life. -- John H. Jenkins, Jenkins... Spoiler-Laden Guide to Isaac Asimov

The added dimension, however, of the Book's place in Asimov's life and career, and the subtlety with which Asimov uses Seldon to comment on life, mortality and fame, make this Book much more rewarding than just another yarn from a master storyteller. -- J. Stephen Bolhafner, St. Louis Post-Dispatch

This Book is easily as enjoyable as the other Foundation Books -- Jeremy D. Frens