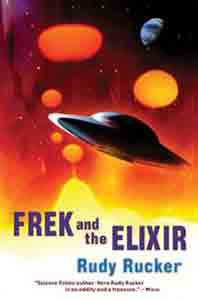 Frek and the Elixir

Synopsis of Frek and the Elixir

In the year 3003, nothing in the world is the same, except maybe that adolescents are still embarrassed by their parents. Society and the biosphere alike have been transformed by biotechnology, and the natural world is almost gone.

Frek Huggins is a boy from a broken family, a misfit because he's a natural child, conceived without technological help or genetic modifications. His dad, Carb, is a malcontent who left behind Frek's mom and the Earth itself several years ago.

Everything changes when Frek finds the Anvil, a small flying saucer, under his bed, and it tells him he is destined to save the world. The repressive forces of Gov, the mysterious absolute ruler of Earth, descend on Frek, take away the Anvil, and interrogate him forcefully enough to damage his memory. Frek flees with Wow, his talking dog, to seek out Carb and some answers. But the untrustworthy alien in the saucer has other plans, including claiming exclusive rights to market humanity to the galaxy at large, and making Frek a hero.

Frek and the Elixir is a profound, playful SF epic by the wild and ambitious Rudy Rucker.

Reviews of Frek and the Elixir

This Book is Robert Heinlein's Have Spacesuit...Will Travel (1958) with the vacuum tubes replaced by wetware and all the knobs turned up to 11. -- Paul Di Filippo, Scifi.com

This Book is worth reading as a library loan, but I wouldn't run out and buy it right away. -- Bob Baska, ScifiDimensions.com

FREK AND THE ELIXIR is a deep, intelligent, often amusing but always impertinent satire ridiculing many of today's 'truths.... -- Harriet Klausner, Allscifi.com

Taking on the theme of the individual versus the homogenized masses, this is a truly original work that should appeal to young teens and adult SF fans alike. -- Jen Talley Exum, The Romantic Times Book Club