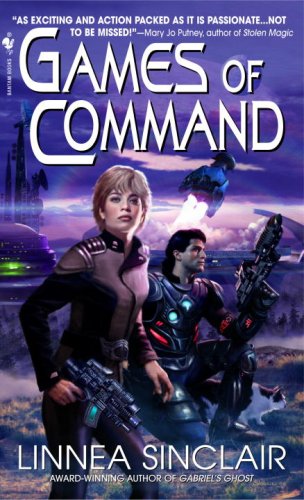 Synopsis of Games of Command

The universe isn't what it used to be. With the new Alliance between the Triad and the United Coalition, Captain Tasha 'sass... Sebastian finds herself serving under her former nemesis, biocybe Admiral Branden Kel-Paten...and doing her best to hide a deadly past. But when an injured mercenary winds up in their ship's sick bay...and in the hands of her best friend, Dr. Eden Fynn'sass's efforts may be wasted.

Wanted rebel Jace Serafino has information that could expose all of Sass's secrets, tear the fragile Alliance apart...and end Sass's career if Kel-Paten discovers them. But the biocybe has something to hide as well, something once thought impossible for his kind to possess: feelings . . . for Sass. Soon it's clear that their prisoner could bring down everything they once believed was worth dying for...and everything they now have to live for.

Reviews of Games of Command

Every Book Linnea Sinclair writes is better than the one before it... -- Harriet Klausner's Review Archive

This one is NOT TO BE MISSED! -- Detra Fitch, Huntress Reviews