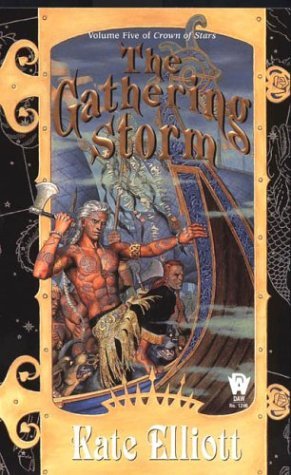 Synopsis of The Gathering Storm (Crown of Stars, Book 5)

The cataclysm long foretold has shaken the world. King Henry's obsession with uniting the warring kingdoms of Wendar and Varre has left his people destitute and vulnerable to attack. As earthly and supernatural forces gather to overthrow all Henry has fought for, Alain and Liath come to realise their twin destinies. Between them they hold the key to secrets which could yet save Henry's realm, but even they may be powerless should the Cursed Ones return.

Reviews of The Gathering Storm (Crown of Stars, Book 5)

The fifth epic tale in the "Crown of Stars" sextet, THE GATHERING STORM, is a complex exciting fantasy, but is also difficult to follow especially for newcomers. -- Harriet Klausner, Under the Covers

Long Series tend to get a bit bloated as they progress, and at almost a thousand pages, this is no exception. -- BooksForABuck