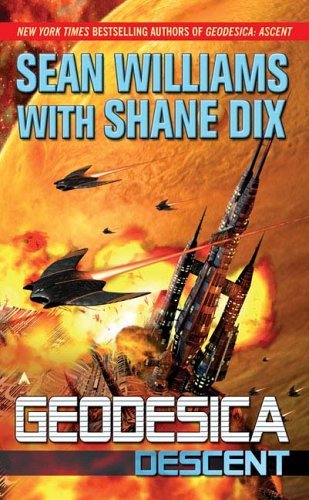 Rebellion comes at a price.

The system of Bedlam has been devoured by a surge of nanotech. Believing that an artificial intelligence from Sol, the Archon, was behind the destruction, three unlikely allies begin plotting their revenge.

Human rebel Melilah Awad has fled deeper into the ancient labyrinth of Geodesica than anyone has ever dared, searching for its secrets. Isaac Forge Deangelis-former Exarch of Bedlam and guardian of Geodesica-will betray everything he believes in to see the Archon defeated. And pilot Palmer Horsfall, inhabited by another rogue Exarch, will risk her not-so-human life to avenge her sister's death.

Three Davids, against one Goliath. And whoever controls Geodesica controls the universe.

Williams and Dix have a flair for combining slam-bang adventures, intriguing characters and cutting-edge scientific and philosophical speculations, resulting in Books that elevate your adrenaline and your intellect. This latest Series is no exception to their reign. -- Paul Di Filippo , Scifi.com

There are many surprise twists so that the audience never becomes bored as they peruse this enthralling space opera. -- Harriet Klausner, Harriet Klausner's Review Archive