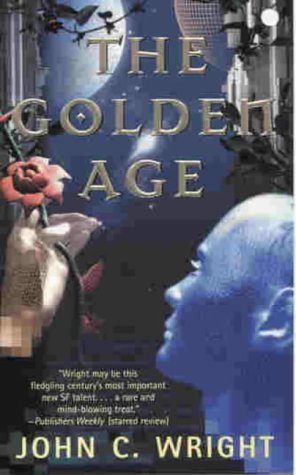 Synopsis of The Golden Age

The Golden Age is 10,000 years in the future in our solar system, an interplanetary utopian society filled with immortal humans.

Phaethon, of Radamanthus House, is attending a glorious party at his family mansion celebrating the thousand-year anniversary of the High Transcendence. There he meets an old man who accuses him of being an imposter, and then a being from Neptune who claims to be an old friend. The Neptunian tells him that essential parts of his memory were removed and stored by the very government that Phaethon believes to be wholly honorable. It shakes his faith. Is he indeed an exile from himself? He can't resist investigating, even though to do so could mean the loss of his inheritance, his very place in society. His quest must be to regain his true identity and fulfill the destiny he chose for himself.

The Golden Age is just the beginning of Phaethon's story, which will continue in The Phoenix Exultant, forthcoming from Tor.

Reviews of The Golden Age

It's a fascinating, challenging, highly enjoyable read, a Book that will be talked about for many years to come. -- Greg L. Johnson, SFSite

Even if you don't recognize all the references, The Golden Age is still a marvelous romp. -- David Soyka, Strange Horizons

The Golden Age is something sadly far more rare than it ought to be in science fiction: a bright, rarefied and thoughtful novel, revelling in wild ideas and almost cluttered with beauty. -- Stuart Carter, The Alien Online

You get the sense that vast, shadowy epics have preceded the current action, and that you will never understand the full depth of meaning being presented to you. Nonetheless, you keep reading or viewing out of sheer fascination with the exotic sights, actions and dialogue you are privileged to witness. -- Paul Di Filippo, Scifi.com