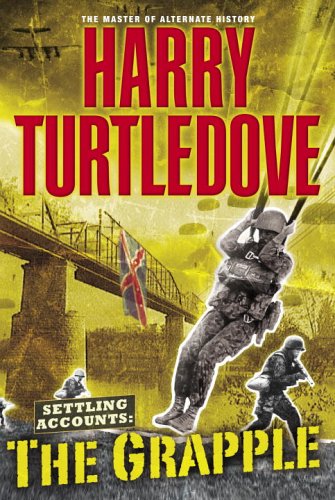 Synopsis of The Grapple

In this stunning retelling of World War II, Harry Turtledove has created a blockbuster saga that is thrilling, troubling, and utterly compelling.

It is 1943, the third summer of the new war between the Confederate States of America and the United States, a war that will turn on the deeds of ordinary soldiers, extraordinary heroes, and a colorful cast of spies, politicians, rebels, and everyday citizens.

The CSA president, Jake Featherstone, has greatly miscalculated the North's resilience. In Ohio, where Confederate victory was once almost certain, Featherstone's army is crumbling, and reinforcements of uninspired Mexican troops cannot stanch a Northern assault on the heartland.

The tide of war is changing, and victory seems within the grasp of the USA. Still, new fighting flares from Denver to Los Angeles.

Indeed, as the air, ground, and water burn with molten fury, new and demonic tools of killing are unleashed, and secret wars are unfolding. The U.S. government in Philadelphia has proof that the tyrannical Featherstone is murdering African Americans by the tens of thousands in a Texas gulag called Determination. And the leaders of both sides know full well that the world's next great power will not be the one with the biggest army but the nation that wins the race against nature and science...and smashes open the power of the atom.

In Settling Accounts, Harry Turtledove blends vivid fictional characters with a cast inspired by history, including the Socialist assistant secretary of war Franklin Delano Roosevelt and beleaguered Confederate military commander Nathan Bedford Forrest. In The Grapple, he takes his spellbinding vision to new heights as he captures the heart and soul of a generation born and raised amid unimaginable violence. This is a struggle of conquest and conscience, played out on American soil.

Reviews of The Grapple

This is the third Book in the Settling Accounts saga and it is a stand alone Book that is the best in the Series to date. -- Harriet Klausner, SFRevu

Even readers new to the Series will enjoy themselves, even if joining the fun in media res. -- Carlos Aranaga, ScifiDimensions

The Grapple is one of the strongest Books in the extended Series Turtledove began with How Few Remain. -- Steven H Silver, SFSite