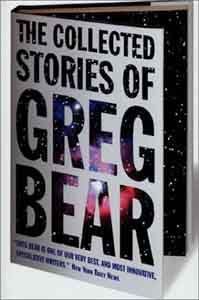 The Collected Stories of Greg Bear

Synopsis of The Collected Stories of Greg Bear

Greg Bear is one of the greatest science fiction writers of the late twentieth century. He has a powerful voice, combining the intense rationality of science with the intensely passionate characters that can only be created by a writer who loves humanity. Bear's novel Moving Mars won the Nebula Award in 1994, and he did it again, in 2000, with Darwin's Radio. He has been honored with Hugo and Nebula nominations for novel-length work eight more times.

But Greg Bear's short fiction is even more astounding, as this powerful career retrospective demonstrates. This collection contains Bear's earliest published fiction from the late 1960s and early 1970s as well his remarkable award-winning work from the '80s and '90s-stories like the Hugo and Nebula Award-winning novella- length version of "Blood Music" and the Hugo and Nebula Award-winner "Tangents."

This Collection is enhanced by brand-new introductions for each story, commentary, and reminiscences by Greg Bear.

Reviews of The Collected Stories of Greg Bear

This is the kind of landmark, monumental volume which instantly becomes a keystone in any SF collection that regards itself as even partially complete. -- Paul Di Filippo, Scifi.com

The Collected Works of Greg Bear in spite of the near breaking of the $30.00 barrier as this anthology displays the talent of one of the late twentieth century genre's top spinners. -- Harriet Klausner, BookBrowser

...Bear's fiction is not so much hard as it is impenetrable. -- Paul Skevington, SF Crowsnest