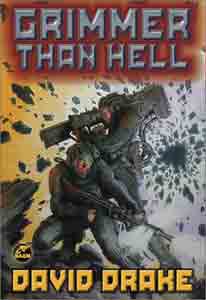 Synopsis of Grimmer Than Hell

The Khalians are weasel shaped and weasel vicious; their main concern with humanity is the way humans taste. Behind the Khalians are others: stronger, smarter, and more vicious still.

Captain Miklos Kowacs and the men and women of Marine Reaction Company 121, the Headhunters, have faced the Khalians on the front lines: now they're taking the war to the enemy, freeing captured planets from their bestial conquerors and penetrating even the Khalian horneworld.

But the worst dangers to Kowacs and his Headhunters come from traitors who wear the same uniform!

The only chance of defeating the Ichtons is to capture one one alive. No human battlefleet could hope to do that-but just maybe a lone scout like Sergeant Dresser could.

Anyway, he has to try. The Ichtons don't conquer their enemies: they destroy them utterly.

In the not-too-distant future, government cameras watch every soul in North America. Only the most cunning and powerful imagine they can commit a crime and escape punishment, and they become the prey of hunters like Jed Lacey.

Lacey has neither hopes nor fears, and he has no mercy at ad. There's never been anybody better at what he does.

There've always been men and women willing to stand between humanity and the worst the universe has to offer. The trouble is, they can't stay human and do their jobs-and they must do their jobs.

Fourteen stones of vivid conflict, including one never before published

Reviews of Grimmer Than Hell

When Drake is really switched on, as in the first six stories, he presents slam-bang action in tight, lean prose. -- Paul Di Filippo, Scifi.com

If you're looking for the kind of SF that makes you think, GRIMMER is a great choice. -- BooksForABuck