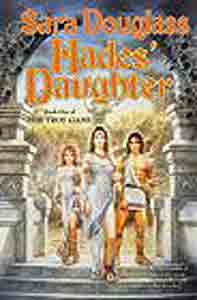 Ancient Greece: A place where the gods hold mortal life cheap, mere playthings to amuse, delight, and abuse at their will.

But those puny mortals are not wholly devoid of power and at the core of their fabulous city-states lies the Labyrinth, where they can shape the powers of the heavens to their own design. When Theseus entered the Labyrinth and came away with the prize of freedom and his beloved Adrianne, Mistress of the Labyrinth, his future seemed assured... Until he abandoned her for the unforgivable sin of bearing him only a daughter, and the world seemed to change. From that day forward, all the Labyrinths in the ancient world started to decay. It slowly became clear that power was fading from the city-states.

Was it the natural decline that comes to all cultures or was it because the power of the Labyrinth had been corrupted by a woman spurned?

A hundred years pass--Troy has fallen and the Trojans are a scattered and humbled people. The warrior Brutus is of the line of kings and gods. He wears the golden kingship bands of Troy proudly--but they are his only mementos of a former glory, for he is a man without a country and is left little else but pride and a memory of the latent power that he could wield if but given a chance. When he receives a god-sent vision of a distant shore where he can rebuild the ancient kingdom, he will move heaven and earth to reach his destiny.

Ever eastward he is drawn, to a lovely and mystical green land that offers him a haven--and a dream of power and conquest. Nothing will deter him... not even the entreaties of the young princess whom he took as his wife and bedded against her will. First her hatred--and now her love--torment and bind him. She is the only one who realizes the danger he is stepping into, and she will do anything to save him... and his son, whom she carries in her womb.

For in the mists of Albion there lies a woman of power--a woman who has used her siren call to cloud Brutus's mind and has her own reasons for luring the warrior to these lush shores....

She is the long-descended granddaughter of Adrianne, and she has in her heart a hatred that has been passed down for generations. Her plans for Brutus will enact a revenge that could destroy the gods themselves.

If Brutus makes the journey successfully, it will be the next step in the Game of the Labyrinth and might start a complicated contest of wills that could span centuries....

I look forward very much to Book 2 of The Troy Game. -- Hilary Williamson, BookLoons

Hades... Daughter is clearly Douglass... writing at its best so far, for American audiences (I...m sure Aussie readers could fill the rest of us in regarding what she's currently dishing up in the Land Down Under) -- Eva Wojcik-Obert, The Fantastica Daily

Her prose is, at times, plodding, but not to the extent that it stands in the way of either enjoying the story or reading through the hefty length of her works. -- Steven H Silver, SF Site