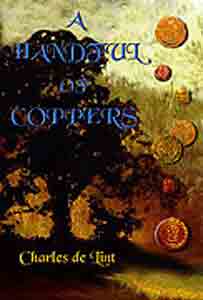 Just as with Triskell Tales, this collection is the publishing event of the year for Charles de Lint's fans!This first volume (of a projected three) will be over 400 pages, and will include nearly 50,000 words of never-before-published short stories, as well as those from obscure publications that have probably eluded even the most ardent de Lint readers. That's not all, his legendary novella, "The Fair in Emain Macha" will also be included.

A Handful of Coppers will be available only from Subterranean Press, in two editions:

Lettered: Limited to 52 signed, traycased copies with a chapBook of extra material: $200

Aynber
"The Fair, the Foul & the Foolish"
"Wizard's Bounty"
"Stormraven"
"The Valley of the Troll"
"The Road to Jarawen" (unpublished)
"A Handful of Coppers" (unpublished)

Avid fans of heroic fantasy should certainly give A Handful of Coppers their attention -- it will introduce them to an exciting voice and, perhaps, lure them into the urban faeryland he now calls home. -- Tom Knapp, Rambles

These stories are still in pinafores and in pigtails, their noses full of childhood's freckles, their mouths still round with the wonder of youth. -- Alma A. Hromic, SF Site