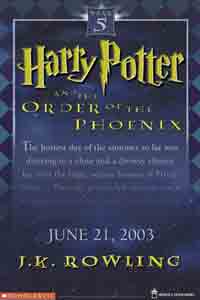 Harry Potter and the Order of the Phoenix

Synopsis of Harry Potter and the Order of the Phoenix

I say to you all, once again--in the light of Lord Voldemort's return, we are only as strong as we are united, as weak as we are divided. Lord Voldemort's gift for spreading discord and enmity is very great. We can fight it only by showing an equally strong bond of friendship and trust.

So spoke Albus Dumbledore at the end of Harry Potter's fourth year at Hogwarts. But as Harry enters his fifth year at wizard school, it seems those bonds have never been more sorely tested. Lord Voldemort's rise has opened a rift in the wizarding world between those who believe the truth about his return, and those who prefer to believe it's all madness and lies--just more trouble from Harry Potter.

Add to this a host of other worries for Harry...

... A Defense Against the Dark Arts teacher with a personality like poisoned honey

... Ron as keeper of the Gryffindor Quidditch team

... And of course, what every student dreads: end-of-term Ordinary Wizarding Level exams

...and you...d know what Harry faces during the day. But at night it's even worse, because then he dreams of a single door in a silent corridor. And this door is somehow more terrifying than every other nightmare combined.

In the richest installment yet of J. K. Rowling's seven-part story, Harry Potter confronts the unreliability of the very government of the magical world, and the impotence of the Authorities at Hogwarts.

Despite this (or perhaps because of it) Harry finds depth and strength in his friends, beyond what even he knew; boundless loyalty and unbearable sacrifice.

Though thick runs the plot (as well as the spine), readers will race through these pages, and leave Hogwarts, like Harry, wishing only for the next train back.

Reviews of Harry Potter and the Order of the Phoenix

The cliffhangers that end every chapter are a reminder that this is in fact a children's Book, even though we adults enjoy it. -- Marta Salij, Detroit Free Press

Some Authors write Series for commercial reasons but this Book confirms that, for Rowling, the architecture of a seven-Book sequence has always been artistically driven. -- Mark Lawson, The Guardian

..."Phoenix" is the smooth product of a natural at the top of her game. -- Laura Miller, Salon.com

It was worth the wait. And then some. -- Deepti Hajela, The Settle Times

I tried to enjoy this Book; millions of people love all things Potter. But Order of the Phoenix is a case of too much adding up to too little. -- John Mark Eberhart, The Kansas City Star

It's perfect that the novel that takes us into the bowels of political intrigue should also be the novel in which Harry grows up. -- Bethany Schneider, NewsDay

"Harry Potter and the Order of the Phoenix" turns out to be by far the best of the boy wizard's adventures so far. -- Bill Hoffman, New York Post

Harry Potter and the Order of the Phoenix, like every Harry Potter before it, is the best one yet... because they keep getting better. -- Chris Wyatt, Cinescape

This is a consistently bad-tempered Book... -- Boyd Tonkin, The New Zealand Herald

This time, Rowling meanders as if in search of her story. She casts her spell, but not to the entrancement of all. -- Sherryl Connelly, New York Daily News

No other living novelist has evidenced the same wide and playful imagination, wild and sure inventiveness, and painted the same epic canvas of good and evil. -- Liz Rosenberg, The Boston Globe

We are satisfied. Emotionally wrought-up and sad, but satisfied. And greatly entertained. -- Jane P. Marshall, The Houston Chronicle

If you've been anticipating major developments, you may be disappointed. -- Elizabeth Ward, The Washinton Post

Harry Potter and the Order of the Phoenix is an exemplary 21st-century text, impossibly long for a children's Book (but the children don't mind), an eclectic mixture of magic and rationalism whose occasional inconsistency troubles no one, and - once you think about it - a deeply troubling vision of the instability and emptiness of any set of established values that may be thrown up as a bulwark against evil. -- Gregory Feeley, The Philadelphia Enquirer

Harry is not the same, simply winsome character he was at age 10. Like us, he has gotten more complicated. -- Karen Sandstrom, Cleveland Plain Dealer

Rowling has not been asleep at the wheel in the three years since the last Potter novel, and I am pleased to report that she has not confused sheer length with inspiration. -- Nicholas Lezard, The Guardian Unlimeted

Although this is a complex novel, the high energy level almost never flags, thanks in part to the Author's ability to create vivid scenes and set pieces. -- Michael Cart, The L.A. Times

...not as much fun as the previous volumes... -- Sue Corbett, The Miami Herald

...the ending seems hollow: There are no twists or revelations, just confirmation of what readers have long suspected. -- Yvonne Zipp, The Christian Science Monitor

It's still worth it. -- Harry Thomas, The San Antonio Express

The result is a wonderfully crafted and nuanced Book that's well worth its length... -- Rachel Leibrock, The Sacramento Bee

Rowling is as inventive here as ever... -- Sherri Hallgren, The Pittsburgh Post-Gazette

Rowling is not a subtle writer, and one of the tiresome things about this Book is how routinely it resorts to turning up the volume, rather than describing anything vividly. -- Philip Hensher, The Spectator

J. K. Rowling has brewed up her customary dose of suspense, boundless invention and vividly imagined detail, but doesn't manage her usual alchemy. -- Kevin Bolger, The Toronto Globe and Mail

The writing is just as good, the plot as interesting, the characters more well-developed than ever. But it is, in essence, a teenage story. -- Kristy Dallas Alley, The Memphis Commercial Appeal

Rowling has kept faith with her fans; this is a page-turner of a Book with enough twists and turns to keep the most devoted or fanatical Potter fan sated with Harry trivia. -- Elaine Leung, The Asian Review of Books

...highly satisfying, hard to put down, and an important addition to the Potter ouvre. -- BooksForABuck

The wait was long, Potter fans. But this was the Book you were hoping for. -- Chris Wyatt, Cinescape

...Rowling once again pulls it off. -- Todd Leopold, CNN

''Harry Potter and the Order of the Phoenix'' is rich and satisfying in almost every respect. -- John Leonard, The New York Times