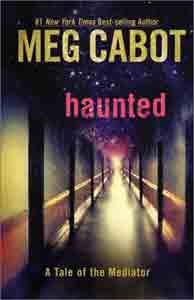 Haunted: A Tale of the Mediator

Synopsis of Haunted: A Tale of the Mediator

My name is Susannah Simon, and I am a mediator -- a liason between the living and the dead. If you think this gets in the way of my attempt at a normal sixteen-year-old life, you'd be right. You try going to the mall while constantly being accosted by the undead.

Not that this is a bad thing all the time. Like, for example, when I discovered my bedroom is haunted by Jesse, the ghost of a nineteenth-century hottie. While I haven't made much progress with him (only one kiss so far), I remain optimistic. Jesse's inexplicable resistance to my charms is not my only obstacle, though: there's this other guy. A live one, who has the same gift of gab with the undead I have. In the same way I'm after Jesse, this guy is after me. And he knows how to send Jesse to the Great Beyond. For good.

So I guess you could say I'm haunted. I just never thought it would be by someone who isn't dead.

Meg Cabot is the Author of the best-selling, critically acclaimed, immensely popular Princess Diaries novels, as well as All-American Girl, Haunted, and two Regency novels, Nicola and the Viscount and Victoria and the Rogue. Meg was born in Bloomington, Indiana, and her childhood was spent in pursuit of air conditioning, of which there was little at the time in southern Indiana. A primary source proved to be the Monroe County Public Library, where Meg whiled away many hours, reading the complete works of Jane Austen, Judy Blume, and Barbara Cartland.

Armed with a fine arts degree from Indiana University, Meg moved to New York City, intent upon pursuing a career in freelance illustration. Illustrating, however, soon got in the way of Meg's true love, writing, and so she abandoned it and got a job as the assistant manager of an undergraduate dormitory at New York University, writing on the weekends, and whenever her boss wasn't looking.

Meg lives in New York City with her husband, Benjamin, a poet, financial market writer and fellow Hoosier, and their one-eyed cat, Henrietta.

Reviews of Haunted: A Tale of the Mediator