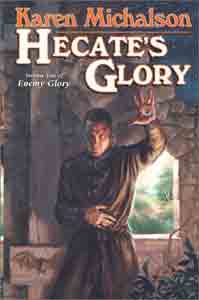 Llewelyn is now a clerical wizard, one whose power derives not from mere arcane knowledge, but directly from Hecate, the goddess to whom he is pledged as consort. After disillusionment in love and betrayal in politics, he is an angry young student in a monastery, bonded to a dark goddess, a magician ready to fight the world.

In Llewelyn's world, the realm of the supernatural lies in the North, while warring kingdoms and a complex religion devoted to gods and goddesses of good and evil dominate the South. Llewelyn schemes for revenge and creates a disaster that forces him out of the monastery and back into the wide world, where he must flee north to escape the Emperor Roguehan, for whom he has been an unreliable spy. Fleeing the enemy, he knows, he will encounter new foes, not so easily recognized.

As Llewelyn travels, the story opens out into broader panoramas of his fascinating world. He will meet an enchanted dragon, befriend a half-elf minstrel, win a claim to the royal throne of far-off Gondal, and face a battle fought by an elven army.

If you like your fantasy dark, depressing, and a little disturbing then Hecate's Glory won't disappoint. -- Eva Wojcik-Obert, Fantastica Daily

Blink and you'll have to reread to catch up. -- Kelly Rae Cooper, Romantic Times Book Club