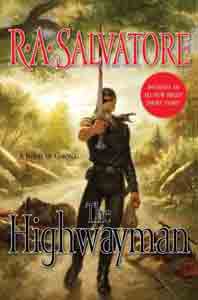 The Highwayman: A Novel of Corona

Synopsis of The Highwayman: A Novel of Corona

Long ago, in a distant land, a lonely young man struggles to discover who he is and where he belongs.He carries the blood and magic of two peoples, a sword of unimaginable power, and the staggering potential for great good...or greater evil.

R.A. Salvatore takes his readers back to his signature world of Corona, where he introduces a fascinating new hero destined to become a fantasy legend.

It is God's Year 54, many years before the DemonWars in the land of Corona. The roads are unsafe to travel, where goblins and bloodthirsty Powries search out human prey. In this savage world, Princes feast while peasants starve, and two religions struggle fiercely for control.

Bran Dynard, a monk of the fledgling religion of Abelle, returns from his mission in a far off land with two prizes: A Book of mystical knowledge, and a new wife, the beautiful and mysterious Sen Wi.

But the world he left behind has changed, and his dream of spreading the powerful wisdom he learned to his fellow monks is soon crushed. Forced to hide Sen Wi and his precious Book, Bran must decide whom he can trust, and where he should now place his faith.

Twenty years later,the situation has grown darker and more desperate. The land is devastated by war, and even the rich and powerful live in fear. Only the masked Highwayman travels freely, his sword casting aside Powries and soldiers with equal ease. The people long for a savior, but is the Highwayman on a mission of mercy...or vengence?

Reviews of The Highwayman: A Novel of Corona

An originally told fantasy with plenty of action, strong characters and a bonus short story called 'the Dowry..., starring Drizzt Do...Urden and Catti-brie (a clever story that, I think, opens the way to a bigger story later) provides everything you can ask for. -- Cindy Lynn Speer, Fantastica Daily

This sword and sorcery novel is a must read for those who like plenty of action, romance and intrigues in their fantasy novels. -- Harriet Klausner, Harriet Klausner's Review Archive