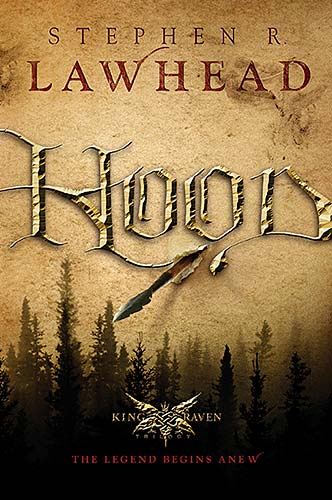 For centuries, the legend of Robin Hood and his band of thieves has captivated the imagination. Now the familiar tale takes on new life, fresh meaning, and an unexpected setting.

Hunted like an animal by Norman invaders, Bran ap Brychan, heir to the throne Elfael, has abandoned his father's kingdom and fled to the greenwood. There, in the primeval forest of the Welsh borders, danger surrounds him-for this woodland is a living, breathing entity with mysterious powers and secrets, and Bran must find a way to make it his own if he is to survive.

Like the forest itself, Hood is deep, dark, and at times savagely brutal-yet full of enchantment and hope. Internationally-acclaimed Author Stephen R. Lawhead has created a lyrical rendering of a time-honored story that will lead you down strange pathways into another time and place.

It's a Book that is on the cusp of being good but just doesn't quite get over the hump... as it is, we can recommend this Book only for the most hardcore of Lawhead fans and perhaps as a diversion for Welsh Literature students. -- Inchoatus

It's got the right amount of action, romance, and adventure to please Robin Hood fans -- William Fulks, Epinions

Stephen R. Lawhead reaches back to his roots in the Pendragon Cycle to turn a well known, and well loved, story into a real, plausible, and at times, gripping tale. -- Lori Fox, TitleTrackk.com

..a little TOO one-dimensional and predictable... -- Eyeris, Eye on Everything

It is difficult to do justice to as well-known and enjoyable story as Robin Hood, but Lawhead does so successfully. -- Challies.com

It's a pity to see a story so evidently essentialist... -- Tom Shippey, Christianity Today

Lawhead's writing is epic and glorious, filled with warmth, delight in the world that exists around us, and gritty realism. -- Christian Fiction Review