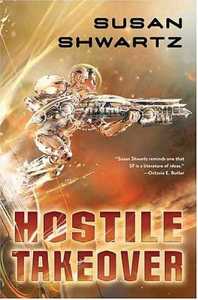 Caroline Cassandra Williams is on the fast track and determined to stay there. A financial analyst in one of the mega-global corporates she's stayed one step ahead of her enemies to keep from losing her place as a valued salaryman -- and two steps in front of those colleagues who would grind her down in a nanosecond to reach the next rung of economic freedom. Even though she's clawed her way out of the insulae, where working poor are warehoused, she keeps herself grimly focused with nightmares of losing her job. Or being frozen into a shipsicle and shipped to the Outer Rim as an expendable drudge. Or -- worst case --going bankrupt and dying slowly as the Authorities harvest her limbs and other body parts.

When the multiplanetary company she works for sends CC to audit Vesta Colony to learn why assets keep hemorrhaging away, she knows this is her big chance to make the Ultimate Career Move. Assuming she gets the facts and pins the crooked trades and any other crimes she finds on someone or a bunch of someones she can turn in with a clear conscience, she can go home first class, collect her fianc... and a fat bonus, then march down the aisle in a perfectly event-planned wedding into a prosperous-ever-after twin career track. She's already even planned vacations with their children-to-come at the theme parks on Easter Island, the cofferdams surrounding Disney World, and the Gobi Dinosaur Pavilions. If CC succeeds, she's set for the rest of her life.

But Vesta turns out to be unlike anything CC has ever seen, and the deeper she delves, the more twisted things get until her life -- not to mention her career -- hangs in the balance. As plots expose more plots, CC finds herself confronting not just possible insider trading and fraud, but attempted murder. Who's at fault? She's got a colony of suspects, including old friends, old rivals and a dashing EarthServ pilot who knows a whole lot more about CC and her worlds than he's letting on and shows signs of being able to shake them -- and her will-power -- any time he wants.

Someone among the analysts, traders, EarthServ, and retired diplomats CC meets is hatching a deadly merger with the potential not just to crash the Solar System's economy, but wipe out humankind. Will CC find out in time -- or will the takeover she fears turn not just hostile, but deadly?

This is really a fairly good Book, though it fights it in order to get things done in the proper order and at the proper time. -- Ernest Lilley, SFRevu

The story as a whole is interesting in spurts, but it's also fitfully dull. -- Adam-Troy Castro , Scifi.com