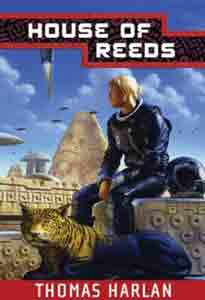 Synopsis of House of Reeds

In five short centuries, the mighty Empire of the M...xica, descendants of the ancient Aztecs allied with Imperial Japan, has spread out to conquer the Earth, left the homeworld, and set its sights on the stars. But the universe is a dangerous place, filled with hidden powers and the relics of ancient civilizations. The M...xica are only the latest of the great Imperial powers to reach for the stars.

But that doesn't stop Imperial M...xica from claiming control.

Xenoarcheologist Gretchen Anderssen had hoped to enjoy her well-earned vacation. She hadn't seen her home-world or her children for many months. But the Company has other plans for her - when she checks in for her transport, she finds new orders for her team. It looks like only a small diversion - a quick trip to the Planet Jagen, to investigate reports of a possible First Sun artifact. She doesn't have to run an excavation, or even gain possession of the artifact. Just file a report. But it smells bad, says Gretchen's Hesht companion, Magdalena. David Parker, the Company pilot assigned to Anderssen's analysis team agrees. And they are so right.

Gretchen, Magdalena, and Parker find themselves in very dangerous territory indeed. Because, unbeknownst to anyone at the Company, the Imperial M...xican Priesthood has decided to wage a war on Jagan - a war not of conquest or defense, but a "flowery war", planned and fomented for the purpose of blooding the Emperor's youngest son. Gretchen and her team are headed right into the middle of the battle.

It may be a War of Flowers, but many people will die, and blood will flow in the streets.

Reviews of House of Reeds

This is a complex Book, with plots within plots that weave into and out of each other and characters who don't appear to be what they are. It's also a fun read, extremely imaginative, and takes place in a setting that's larger than any of the characters who move in it. -- Steven Sawicki, Scifi.com

In the difficult balance between developing characters and putting them in danger, Harlan chose action--perhaps a bit too often. -- BooksForABuck