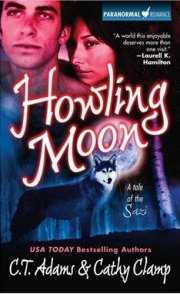 He's a wolf... She's a jaguar... Raphael is a former agent of the shape shifter secret police, forced into retirement after a very public scandal. Now he's assigned to help the victim of a hideous crime -- a woman who has been attacked by a serial killer, and accidentally turned into a were-jaguar. Worse yet, Catherine turns out to be Raphael's fated mate. But the serial killer is still on her trail, and perhaps even worse, Raphael's pack wants her dead. Caught between destiny and duty... Raphael must make his choice -- and, in doing so, perhaps lose his pack -- in this tale of obsession, revenge, lust, pack politics, and true love.

... a compelling read that will appeal to a wide variety of readers. -- Amanda Kilgore, The Eternal Night

...one of the shining lights of the Tor line of paranormal romances... -- Michael M Jones, SFSite

I was drawn to read it at all hours of the day and night. -- Robyn Roberts , Once Upon A Romance

The reader will be intrigued from page one... -- Lori Sears, The Romance Readers Connection