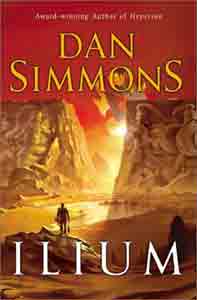 From the towering heights of Olympos Mons on Mars, the mighty Zeus and his immortal family of gods, goddesses, and demigods look down upon a momentous battle, observing -- and often influencing -- the legendary exploits of Paris, Achilles, Hector, Odysseus, and the clashing armies of Greece and Troy.

Thomas Hockenberry, former twenty-first-century professor and Iliad scholar, watches as well. It is Hockenberry's duty to observe and report on the Trojan War's progress to the so-called deities who saw fit to return him from the dead. But the muse he serves has a new assignment for the wary scholic, one dictated by Aphrodite herself. With the help of fortieth-century technology, Hockenberry is to infiltrate Olympos, spy on its divine inhabitants ... and ultimately destroy Aphrodite's sister and rival, the goddess Pallas Athena.

On an Earth profoundly changed since the departure of the Post-Humans centuries earlier, the great events on the bloody plains of Ilium serve as mere entertainment. Its scenes of unrivaled heroics and unequaled carnage add excitement to human lives devoid of courage, strife, labor, and purpose. But this eloi-like existence is not enough for Harman, a man in the last year of his last Twenty. That rarest of post-postmodern men -- an "adventurer" -- he intends to explore far beyond the boundaries of his world before his allotted time expires, in search of a lost past, a devastating truth, and an escape from his own inevitable "final fax." Meanwhile, from the radiation-swept reaches of Jovian space, four sentient machines race to investigate -- and, perhaps, terminate -- the potentially catastrophic emissions of unexplained quantum-flux emanating from a mountaintop miles above the terraformed surface of Mars ...

The first Book in a remarkable two-part epic to be concluded in the upcoming Olympos, Dan Simmons's Ilium is a breathtaking adventure, enormous in scope and imagination, sweeping across time and space to connect three seemingly disparate stories in fresh, thrilling, and totally unexpected ways. A truly masterful work of speculative fiction, it is quite possibly Simmons's finest achievement to date in an already storied literary career.

This is a Book impossible to not like, and hard to not love. -- Edward Carmien, SFRevu

For answers to the mysteries laid out in ''Ilium'' -- from the true identity of the Olympian gods to the fate of robots and humans and of the ''little green men'' on Mars for whom communication means death -- you will have to wait for the promised sequel. For now, matching wits with Simmons and his lively creations should be reward enough. -- Gerald Jonas, The New York Times

Like the best Science Fiction, Simmons gives the reader a sense of wonder, and to that, on many levels. -- Rob H. Bedford, SFFWorld

Eventually, if keep going, your patience will be paid back a thousand fold. -- Cindy Lynn Speer, Fantastica Daily

It should be ridiculously pretentious, but in fact, this is very fine SF, space opera imbued with literary depth, respecting what's come before in the field, but having terrific fun messing with our expectations. -- Dave Kennedy, DKennedy.org

Simmons has done his art well: his Book is magnificently imaginative, perfectly formed and often beautiful. -- Adam Roberts, Infinity Plus

whisks you off into astonishing imaginative scenes of the sort you could only dream about during long afternoon classes at school. -- Justina Robson, The Guardian

This one is a definite keeper. -- BooksForABuck

SF doesn't get any better than this. -- Lalith Vipulananthan, The Alien Online

Richly entertaining--particularly for scholars of classical literature--and a pleasure to read... yet the ending is a tad unrewarding in anticipation of the sequel bars it from our highest ratings -- Inchoatus