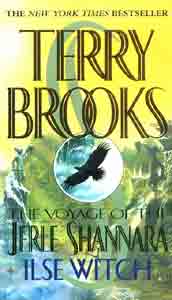 New York Times bestselling Author and the master of epic fantasy Terry Brooks returns to the fantasy that launched his career -- the fantasy that remains closets to his heart, and to the hearts of millions of fans around the world. More than twenty years have passed since Brooks set the new standard for the genre with his astonishing first novel, The Sword of Shannara, the now-classic commencement of a centuries-spanning epic of good and evil. Now Brooks embarks on what promises to be his masterpiece -- Ilse Witch: Book One of The Voyage of the Jerle Shannara.

When the mutilated body of a half-drowned elf is found floating in the seas of the Blue Divide, an old mystery resurfaces. Thirty years ago, the elven prince Kael Elessedil -- brother to the current king -- led an expedition in search of a legendary magic said to be more ancient, more powerful, than any in the world. Of all those who set out on that ill-fated voyage, not one ever returned...

Until now. For the rescued elf carries a map covered with mysterious symbols only one man has the skill to decipher. That man is Walker Boh, the last of the Druids. But someone else understands the map's significance, someone dark and ruthless: the Ilse Witch, a beautiful but twisted young woman who wields a magic as potent as his own. She will stop at nothing to possess the map -- and the magic it leads to. To stop her, Walker must find the magic first.

So begins the voyage of the Jerle Shannara. Aboard the sleek, swift airship are an elven prince; a Rover girl; a monstrous creature part man, part enigma; and a young man named Bek Rowe, who may unknowingly hold the key to the success of the mission -- or to its cataclysmic failure. Now, as old secrets come to light, sowing seeds of mistrust and suspicion among the crew, the Jerle Shannara flies into the face of unknown terrors while the Ilse Witch and her dark allies follow, waiting to strike...

While the story plods in the middle, it does lay the trilogy's groundwork and the Author makes up for it in the second half. -- Hilary Williamson, Booklooks

I would recommend this Book to anyone who enjoys an epic adventure. -- Lisa Brunetta, SF Site

This epic fantasy is filled with brilliant characters, an enthralling story line, and an urge that leaves the audience obsessing for the next two novels in the latest trilogy. -- Harriet Klausner, BookBrowser

This story is a wonderfully written bit of fantasy and can be enjoyed by all readers. -- Conan Tigard, Bookbrowser

...readers won't be able to wait for the next chapter in the Series. -- Amita Guha, Bookreporter.com

At worst, the Book reads like preliminary Author notes, not a novel itself. -- Andrew Osmond, Cinescape