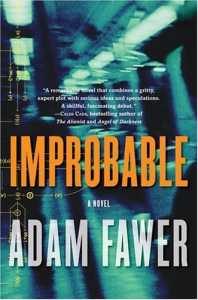 A brilliant new talent bursts on to the thrillerscene with a dazzling work of spellbindingfiction, a riveting story of chance, fate,and numbers, and one man's strange journey pastthe boundaries of the possible into the chilling realm of the ...Improbable

After nightfall, David Caine inhabits a world of risk, obsession, rich rewards, and sudden, destructive downfalls. A compulsive gambler possessing a brilliant mathematical mind -- and an uncanny ability to calculate odds in the blink of an eye -- he prowls the underground poker clubs of Manhattan, winning more than he loses. But Caine is a man prone to crippling epileptic incidents -- and one night he makes a costly miscalculation, suffering the most intense seizure he has ever experienced. And his life spins madly out of control.

Desperate to regain his equilibrium, he agrees to test an experimental drug with unnerving side effects. Suddenly he is having visions of the past, present, and future; either peering through a window into an alternate reality or teetering on the precipice of a psychotic breakdown. Chemistry and destiny have colluded to grant David Caine the astonishing ability to foresee the consequences of his actions and the probability of various outcomes, both good andterrible.

But with his "gift" comes grave danger, for he is not the only one who knows his secret. Frightening powers operating from the shadows now want him for their own, forcing Caine to seek help from a most improbable ally -- a beautiful rogue CIA agent skilled in the death arts -- on a desperate race for survival with his sanity hanging by the slenderest of threads.

The novel starts slow, introducing you to all the characters but before you realize what's happening it's developed into a page-turner you don't want to put down. -- Gayle Surrette, SFRevu.com

Improbable is one of those Books you put down only because your alarm is set for 6 AM and if you don't go to sleep now, you'll be wasted in the morning. But wait, is that a sore throat you're starting to feel? -- Victoria Zackheim, About.com

Despite all the action (of which there is plenty and all of it tight without a single loose end), there is a serious scientific hypothesis underneath the layers of the various subplots. -- Judi Clark, MostlyFiction.com

I'll recommend Improbable for what it has - in spite of what it doesn't. -- Peter Mergendah, Rocky Mountain News