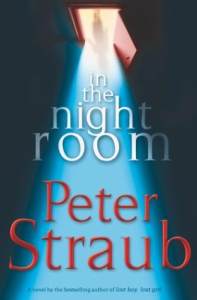 In the Night Room

Synopsis of In the Night Room

In his latest soul-chilling novel, bestselling Author Peter Straub tells of a famous children's Book Author who, in the wake of a grotesque accident, realizes that the most basic facts of her existence, including her existence itself, have come into question.Willy Patrick, the respected Author of the award-winning young-adult novel In the Night Room, thinks she is losing her mind...again. One day, she is drawn helplessly into the parking lot of a warehouse. She knows somehow that her daughter, Holly, is being held in the building, and she has an overwhelming need to rescue her. But what Willy knows is impossible, for her daughter is dead.On the same day, Author Timothy Underhill, who has been struggling with a new Book about a troubled young woman, is confronted with the ghost of his nine-year-old sister, April. Soon after, he begins to receive eerie, fragmented e-mails that he finally realizes are from people he knew in his youth...people now dead. Like his sister, they want urgently to tell him something. When Willy and Timothy meet, the frightening parallels between Willy's tragic loss and the story in Tim's manuscript suggest that they must join forces to confront the evils surrounding them.

Reviews of In the Night Room

The Book is exceedingly well written with darn near perfect plotting and characterization that almost doubles for biography. -- Steve Sawicki, SFRevu

In the Night Room is packed with interesting stuff. -- Bob Minzesheimer, USA Today

This is popular fiction of an intriguingly high order, deftly exploring how imagination not only draws on reality, but can actually shape it. -- Frank Wilson, Philadelphia Inquirer

Straub knows the importance of a good story and solid characters - and "In the Night Room" has an abundance of both. -- Dorman T. Shindler, The Denver Post

"In the Night Room" is so imaginative, intricate and electrifying that readers will be tempted to race through the novel. -- Carol Deegan, Associated Press

The result will leave you puzzled, entertained, maybe a bit angry --- and thinking. -- Joe Hartlaub, BookReporter.com

The result is not only a powerful and arresting foray into the dark fantastic, but also a novel that manages to provide a deeply personal glimpse into its Author's psyche without sacrificing narrative and suspense. -- Christopher Rice, The Washington Post

Horror fans, however, will find plenty to enjoy here, including an eerie Series of emails that Underhill receives at the story's outset; the chilling, changing nature of the villain; and a return to one of the most terror-inducing haunted houses of recent memory. -- Don Kaye, The Horror Channel

Not since GHOST STORY and the TALISMAN has Peter Straub written a more terrifying and chilling horror novel than IN THE NIGHT ROOM. -- Harriet Klausner, The Best Reviews

Like most sequels, In the Night Room doesn't make a lot of sense in isolation. But, as a companion to lost boy lost girl, it is a finely crafted and ultimately satisfying ghost story. -- Mark Graham, The Rocky Mountain News