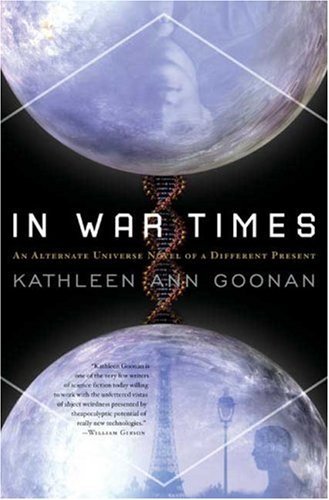 Synopsis of In War Times

Sam Dance is a young enlisted soldier in 1941 when his older brother Keenan is killed at Pearl Harbor. Afterwards, Sam promises that he will do anything he can to stop the war. During his training, Sam begins to show that he has a knack for science and engineering, and he is plucked from the daily grunt work of twenty-mile marches by his superiors to study subjects like code breaking, electronics, and physics in particular, a science that is growing more important to the war effort. While studying, Sam is seduced by a mysterious female physicist that is teaching one of his courses, and given her plans for a device that will end the war, perhaps even end the human predilection for war forever. But the device does something less, and more, than that. After his training, Sam is sent throughout Europe to solve both theoretical and practical problems for the Allies. He spends his free time playing jazz, and trying to construct the strange device. It's only much later that he discovers that it worked, but in a way that he could have never imagined.

Reviews of In War Times

Goonan has delivered a novel worthy of strong consideration when awards for best SF novel are given next year. -- D. Douglas Fratz, Scifi.com

...the story itself is like a fine jazz piece: a strong theme, lovingly developed, exquisitely improvised. -- Barry Newton, SFRevu

While this Book does raise some "what if?" questions, the reader is left wondering what really happened and what the whole point is. -- Ann Wilwert, The Romantic Times Book Club