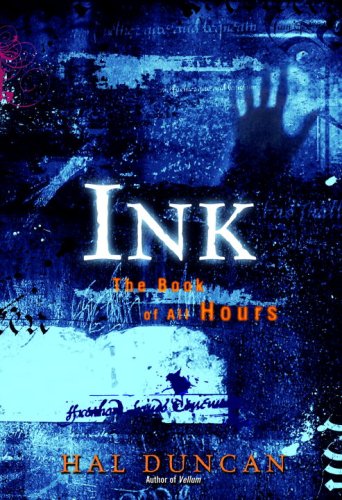 Ink: The Book of All Hours

Synopsis of Ink: The Book of All Hours

With his stunning debut novel, Vellum, Hal Duncan shattered the boundaries between genres. Fantasy, or science fiction, Vellum shocked with the boldness of its ideas, seduced with the sensual beauty of its prose, and astonished with its imaginative sweep. Now Duncan returns with another epic tour de force that surpasses all expectations.

INK: The Book of All Hours

Once, in the depths of prehistory, they were human. But in a moment of brutal transfiguration, they became unkin, beings who possessed the power to alter reality by accessing the Vellum: a realm of eternity containing every possibility, every paradox, every heaven . . . and every hell. The Vellum became a battleground where forces of order and chaos fought across time and space. The ultimate weapon in that bloody war spanning through history and myth, dreams and memory, was The Book of All Hours, a legendary tome within which the blueprint for all reality is inscribed, a volume long lost amid the infinite folds of the Vellum.

Until, in 2017, it was found by Reynard Carter, a young man with the blood of unkin in his veins.

Until Phreedom Messenger and her brother, Thomas, were swept up in an archetypal dance of death and rebirth.

Until a hermit named Seamus Finnan found the courage to re-forge his broken soul, and a self-proclaimed angel called Metatron unleashed a plague of AI bitmites.

Now, in the aftermath of the apocalypse, several survivors search desperately for the remnants of themselves scattered across the Vellum like torn pages, determined to use the blood of the unkin to rewrite The Book of All Hours, and to forge a new destiny for themselves and all humanity. Reality will never be the same.

Reviews of Ink: The Book of All Hours

Not for everyone, Ink is a unique refreshing cerebral saga that defies simplistic classification. -- Harriet Klausner, SFRevu