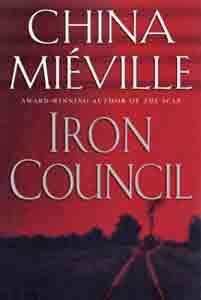 Following Perdido Street Station and The Scar, acclaimed Author China Mi...ville returns with his hugely anticipated Del Rey hardcover debut. With a fresh and fantastical band of characters, he carries us back to the decadent squalor of New Crobuzon'this time, decades later.

It is a time of wars and revolutions, conflict and intrigue. New Crobuzon is being ripped apart from without and within. War with the shadowy city-state of Tesh and rioting on the streets at home are pushing the teeming city to the brink. A mysterious masked figure spurs strange rebellion, while treachery and violence incubate in unexpected places.

In desperation, a small group of renegades escapes from the city and crosses strange and alien continents in the search for a lost hope.

In the blood and violence of New Crobuzon's most dangerous hour, there are whispers. It is the time of the iron council. . . .

The bold originality that broke Mi...ville out as a new force of the genre is here once more in Iron Council: the voluminous, lyrical novel that is destined to seal his reputation as perhaps the edgiest mythmaker of the day.

In short, what Mi...ville has accomplished once again with this Book is to render a world both utterly estranged from ours, yet eerily congruent, and to populate it with figures who breathe and bleed and love, and whom we may care deeply about. -- Paul Di Filippo, Scifi.com

China Mieville is a great world builder who is on the brink of superstardom. -- Harriet Klausner , Allscifi.com

If you are prepared to take my word for it that it is really good, then just go out and buy a copy, and avoid all reviews until you have finished it. -- Cheryl Morgan, Emerald City

To convey both the weirdness and the familiarity of his vividly elaborated world, he peppers his sentences with unusual words (''serein,'' ''strath,'' ''atramentous,'' ''cuneal'') that will send most readers to a good unabridged dictionary -- and back again to this challenging but deeply rewarding novel. -- Gerald Jonas, The New York Times

Acolytes of originality, seekers after undiluted imagination, in Mi...ville's work, you'll strike the motherlode, and it will leave you gasping for more. -- Ariel, The Alien Online