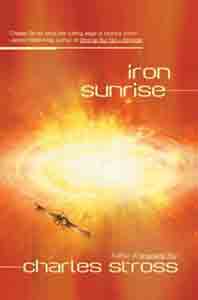 Charles Stross's "visionary" (Library Journal) debut novel Singularity Sky was hailed as "a carnival of ideas" (Michael Swanwick) and sealed his reputation as the writer who "owns the cutting edge of science fiction" (James Patrick Kelly). Now he moves beyond that horizon with his stunning sequel, Iron Sunrise.

When the planet of Moscow was annihilated, its few survivors launched a counter-attack against the most likely culprit: the neighboring system of New Dresden. But New Dresden wasn't responsible, and as the deadly missiles approach their target, Rachel Mansour, agent for the interests of Old Earth, is assigned to find out who was.

And the one person who knows is a disaffected teenager who calls herself Wednesday Shadowmist. But Wednesday has no idea what she knows...

I'm ranking Iron Sunrise as a hair less than perfect only in comparison to its predecessor. -- Paul Di Filippo, Scifi.com

IRON SUNRISE is innovative science fiction with many subplots leading seamlessly back to the main storyline. -- Harriet Klausner, BooksNBytes

It seems that Charles Stross has learned how to write novels that are the equal of his stories and I would not be at all surprised to see this one on the Hugo and Nebula ballots. -- Sam Lubell, SFRevu