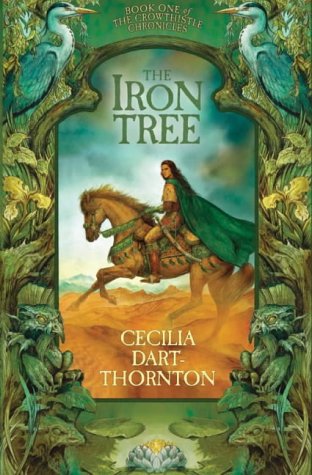 Synopsis of The Iron Tree

Jarred is a young boy who has grown up among his mother's peaceful desert people. While Jarred loves his mother, he longs to know the history of his father, a journeyman who left years earlier, promising to return for his wife and infant son. A broken promise but a token left behind--an amulet for Jarred that he has worn always. Some say it brings more than a bit of good luck his way, for no harm has ever befallen the boy.

When Jarred comes to manhood, he decides to journey into the world to seek his fortune and perhaps along the way find news of his father. In his travels he will come to a place so unlike his own as to boggle his mind--a place of immense tracts of waterways and marshes, where the very air seems to teem with magic and a people surrounded by creatures fey and not, with enough strange customs and superstitions to make his head swirl.

And to the beautiful Lilith, a woman who will haunt his dreams and ultimately steal his heart...who perhaps can provide a key to his heritage.

Reviews of The Iron Tree

Cecilia Dart-Thornton has created a uniquely beautiful world in The Iron Tree, in other words, but this is not enough to compensate for the slenderness of the plot and the wordiness of her writing style. -- A.M. Dellamonica, Scifi.com

The first tale of the Crowthistle Chronicles, THE IRON TREE, is a fantastic epic fantasy starring a coming of age champion and a magnificent heroine, both seeking information on their respective families. -- Harriet Klausner, The Best Reviews

The story bristles with mystery and magic...Dart-Thornton delights in vivid descriptions, her words painting pictures in the mind's eye filled with colour, wonder and an ethereal beauty. -- Mark Timmony, Boomerrang Books