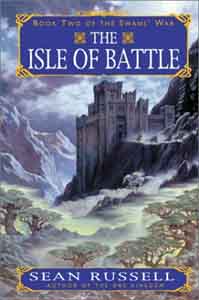 The Isle of Battle

Synopsis of The Isle of Battle

Epic high fantasy this good comes along only once in a while! Standing with the best of the field, Sean Russell's Swans' War Series has enchanted readers and critics alike with its fascinating tale of good and evil, romance and violence, magic and mystery.After years of bitter enmity, the battle for power between the Renn... and the Wills families has reached a fever point. Fleeing a forced marriage, young Elise Wills has made a desperate bargain with a dark river spirit to save her own life. It is left to the wanderer Alaan, together with a band of brave companions, to find Elise -- even as the dark knight Hafydd hunts Alaan for the secrets he possesses. But if Alaan cannot free Elise, the entire kingdom will be consumed in a bloody war between unquiet ghosts.

Reviews of The Isle of Battle

What awaits us in the next, astonishing volume? All we can do is wait. -- Lisa DuMond, SF Site

Let it be said that after some haring off in various directions, Russell begins to tie the narrative threads of his story together, eventually reassembling them in a manner that greatly justifies or at least redeems his earlier restless sub-plotting. -- William Thompson, SF Site

The story is a many-layered tale whose layers become more interesting and enjoyable as they unfold. -- Rob H. Bedford, SF World

Let's hope all the dangling threads and unanswered questions are explained in the next episode of this enchanting saga. -- Harriet Klausner, BookBrowser

The Isle of Battle is mostly questing and chasing -- Gavin J. Grant, BookPage

I've been trying to pinpoint what it is about Mr. Russell's work that captures me so completely. -- KC Heath,Yet Another Book Review

Author Russell, again, delivers the goods with his unassuming, easy reading style in which the characters rise of the pages and dance before our eyes. -- R.F. Briggs, Yet Another Book Review

Fans of epic fantasy will definitely want to add THE ISLE OF BATTLE to their must-have list. -- BooksForABuck

Although most fantasy fiction is primarily based on come 'real world' legend or other, it is still very satisfying to read a work that manages to blend them together to the extent and with the expertise of Sean Russell. -- Vegar Holmen, The Alien Online