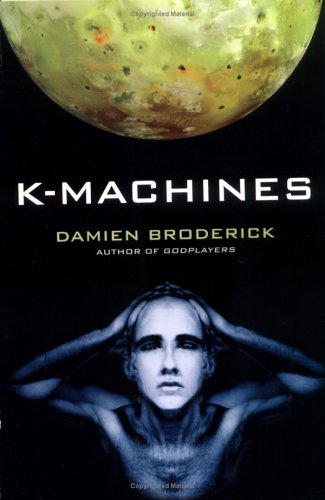 August Seebeck is a 20-something student from a world not quite the same as ours. In GODPLAYERS, August tumbled into a vastly larger universe, and learned that he wasn't, after all, an orphaned only child. He and his turbulent siblings, and the breathtaking Lune and others still stranger, are Players in the Contest of Worlds. They are mysteriously transformed humans whose ancient task is enigmatic battle with the dread, passionate K-Machines. Now crisis deepens. Empowered with a potent killing device of his own, an eerie gift from legend, August finds himself flung from world to world in a brutal and baffling game, with entire universes at stake and very little idea of the rules. Only two things are clear: his beloved Lune is not who she seems, and August's pivotal role is no chance accident. In this cosmos, survival of the gods themselves depends upon human victory over the K-Machines.

K-Machines is more disappointing than Godplayers not just because the questions still have not yet been answered and the background explained, but because the distractions from the questions here are not as interesting as in the first Book and are not really explained in themselves. -- Sam Lubell, SFRevu

A mad fusion of Alan Moore's Promethea with a half-dozen Greg Egan novels (tossing in a bit of M. John Harrison's space opera Light [2002] for the Jamie Davenport segments), Broderick's duology is an Ouroboros Worm that ends up eating itself but in the process giving birth to a miraculous and hopeful new cosmic egg. -- Paul Di Filippo, Scifi.com

...in the final analysis, I think, this Book is really to a great extent a commentary on SF, and on the love we (the Author most certainly included) have for the genre. -- Rich Horton, SF Site