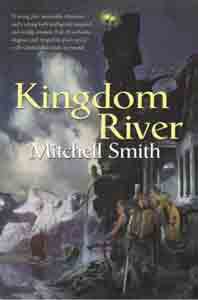 Synopsis of Kingdom River: Book Two of the Snowfall Trilogy

Sam Monroe is the reluctant commander of a tough-minded warrior people living in what was once northern Mexico. Flanked on the northeast by the Kingdom River, a vast, trade-driven nation that replaced the southern US, and on the northwest by the Khanate, an empire of nomads who swept down the west coast under the rule of the Great Khan, an pressured on the South by the Inca, Sam's people cling to a precarious, hard-won freedom. Aware that Khan intends to smash his tiny country on the way to conquering Kingdom River, Sam makes a nervous alliance with proud, stubborn Queen Joan, who rules Kingdom River from an island capital in the middle of the wide Mississippi. Sam hate the ever-growing burden of rulership and command and especially fulfilling his promise to marry Queen Joan's naive daughter.

Reviews of Kingdom River: Book Two of the Snowfall Trilogy

The middle Book in the projected Snowfall trilogy, Kingdom River stands foursquare on its own merits, requiring no prior knowledge from readers and ending with satisfying conclusiveness. -- Paul Di Filippo, Scifi.com

...much of the charm and fun of Snowfall is lost in this Book which, for the most part, is only a Series of battles, skirmishes and military strategy. -- Mark Graham, The Rocky Mountain News

It's interesting to see the world that we are so familiar with reborn, reinterpreted, as these diverse groups fight for power as well as survival. -- Cindy Lynn Speer, Fantastica Daily