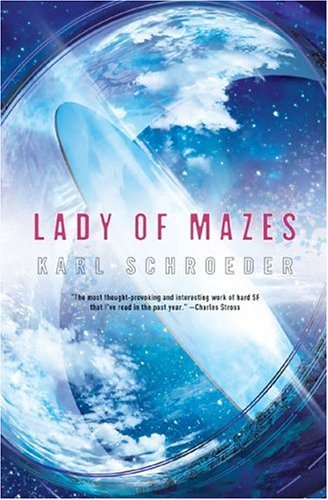 Synopsis of Lady of Mazes

Karl Schroeder is one of the new stars of hard SF. His novels, Ventus and Permanence, have established him as a new force in the field. Now he extends his reach into Larry Niven territory, returning to the same distant future in which Ventus was set, but employing a broader canvas, to tell the story of Teven Coronal, a ringworld with a huge multiplicity of human civilizations. Brilliant but troubled Livia Kodaly is Teven's only hope against invaders both human and superhuman who would destroy its fragile ecologies and human diversity. Filled with action, ideas, and intellectual energy, Lady of Mazes is the hard SF novel of the year.

Reviews of Lady of Mazes

...a novel of high ambition executed with the talent and imagination to match. -- Paul Witcover, Scifi.com

Schroeder's vision of transient realities has a nice dreamlike quality that could translate well into a visual medium should it ever find its way to TV or even the big screen. -- Daniel Eskridge, Galactium.com