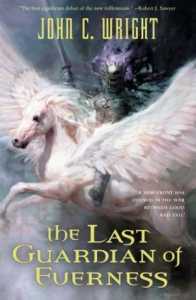 The Last Guardian of Everness

Synopsis of The Last Guardian of Everness

The rave reviews for John Wright's science fiction trilogy, The Golden Age, hail his debut as the most important of the new century. Now, in The Last Guardian of Everness, this exciting and innovative writer proves that his talents extend beyond SF, as he offers us a powerful novel of high fantasy set in the modern age.

Young Galen Waylock is the last watchman of the dream-gate beyond which ancient evils wait, hungry for the human world. For a thousand years, Galen's family stood guard, scorned by a world which dismissed the danger as myth. Now, the minions of Darkness stir in the deep, and the long, long watch is over. Galen's patient loyalty seems vindicated.

That loyalty is misplaced. The so-called Power of Light is hostile to modern ideas of human dignity and liberty. No matter who wins the final war between darkness and light, mankind is doomed either to a benevolent dictatorship or a malevolent one. And so Galen makes a third choice: the sleeping Champions of Light are left to sleep. Galen and his companions take the forbidden fairy-weapons themselves. Treason, murder, and disaster follow. The mortals must face the rising Darkness alone.

An ambitious and beautifully written story, The Last Guardian of Everness is an heroic adventure that establishes John Wright as a significant new fantasist. It is just the start of a story that will conclude in the companion volume, Mists of Everness.

Reviews of The Last Guardian of Everness

For fans of fantasy who enjoy a rich and textured story that unfolds in twists and turns, The Last Guardian Of Everness will be a wonderful read. -- Nicki Lynch, SFRevu

Wright's strong writing, story-telling, and world-building make THE LAST GUARDIAN OF EVERNESS a Book that's hard to put down. -- BooksForABuck

Already regarded as one of the best science fiction writers of the last decade for his stirring Golden Age trilogy, John C. Wright proves he has the right stuff to write exciting modern day epic fantasy with the terrific The Last Guardian of Everness. -- Harriet Klausner, BooksNBytes