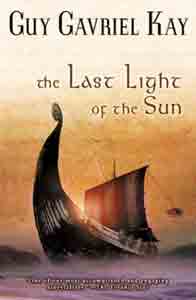 The Last Light of the Sun

Synopsis of The Last Light of the Sun

In his eagerly awaited new novel, Guy Gavriel Kay turns his gaze to the northlands, brilliantly evoking the Viking, Anglo-Saxon and Celtic cultures of a turbulent age.

There is nothing soft or silken about the north. The lives of men and women are as challenging as the climate and lands in which they dwell. For generations, the Erlings of Vinmark have taken their dragon-prowed ships across the seas, raiding the lands of the Cyngael and Anglcyn peoples, leaving fire and death behind. But times change, even in the north, and in a tale woven with consummate artistry, people of all three cultures find the threads of their lives unexpectedly brought together...

Bern Thorkellson, punished for his father's sins, commits an act of vengeance and desperation that brings him face-to-face, across the sea, with a past he's been trying to leave behind.

In the Anglcyn lands of King Aeldred, the shrewd king, battling inner demons all the while, shores up his defenses with alliances and diplomacy-and with swords and arrows-while his exceptional, unpredictable sons and daughters pursue their own desires when battle comes and darkness falls in the woods.

And in the valleys and shrouded hills of the Cyngael, whose voices carry music even as they feud and raid amongst each other, violence and love become deeply interwoven when the dragon ships come and Alun ab Owyn, chasing an enemy in the night, glimpses strange lights gleaming above forest pools.

Making brilliant use of saga, song and chronicle, Kay brings to life an unforgettable world balanced on the knife-edge of change in The Last Light of the Sun.

Reviews of The Last Light of the Sun

What is notable about Kay's writing is how his spare sentences come together to form a complex tapestry of words, ideas, and thoughts that one can not help but see a brilliant and vibrant picture. -- Don Smith, SFRevu

Rather than writing a simple adventure, Kay provides the reader with an intelligent story with much more to think about than the run of the mill fantasy novel. -- Steven H Silver, SFSite

THE LAST LIGHT OF THE SUN is a very special fantasy novel that will be read in one sitting because readers will find it impossible to put down. -- Harriet Klausner, AllScifi.com

Kay has always been a strong story-teller, and The Last Light of the Sun is more evidence of that fact. -- James Schellenberg, Challenging Destiny

In The Last Light of the Sun, Kay attempts his darkest, and in some ways most ambitious, novel to date. -- Lincoln Cho, January Magazine

In The Last Light of the Sun, Guy Gavriel Kay gives us yet another superb epic, incorporating action, romance, the clash and assimilation of cultures, and an evolution of belief systems. Absolutely not to be missed! -- Hilary Williamson, Bookloons

Kay's strong writing kept me hooked to the story even when he digressed into amusing sidetracks about the post-story lives of minor characters who would never be seen in the narrative again. -- BooksForABuck

A gorgeous Book: it achieves in every way the scope of its ambition. -- Inchoatus