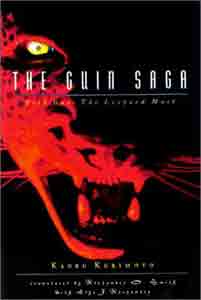 Synopsis of The Leopard Mask (The Guin Saga, Book 1)

When The Leopard Mask was first published to kickoff a fantasy epic announced to extend to a fullhundred instalments, many were incredulous.Eighty-six Books later, The Guin Saga continues toset new records in Japan with new instalmentsroutinely making best-seller lists. Kurimoto'slifework, a fantasy epic of uncommon richness andintrigue, will enthral readers of all ages withits universal themes. Her saga of two orphanedroyal twins, Rinda and Remus, and the man-beastGuin, who is their saviour, is storytelling at itsbest. The saga starts here, with the Leopard Mask. SynopsisAfter Mongaul attacks the kingdom of Palos, Guin, a trained warrior with a cat-like facade, must rescue the "twins of Parros" held hostage by the Mongaul patrol, and subsequently work to fight off the enemy.

Reviews of The Leopard Mask (The Guin Saga, Book 1)

A very fast read, with a vocabulary easily accessible to even young readers, Kurimoto, or at least her translator A.O. Smith, manages to tell an exciting and very intriguing story without sinking into either sesquipedalian prose or pulp sensationalism. -- Georges T. Dodds, SF Site

Yes, this is very much like a comic, or serial, with new perils in each scene and impossible last minute escapes lurking around every corner. -- Lorraine Marsh, SFRevu

The Leopard Mask feels less like the first Book in a Series and more like a rich chapter in a much longer novel. The rest of the tale can't come soon enough. -- Sarah Meador, Rambles