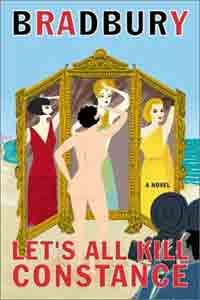 Synopsis of Let's All Kill Constance

On a dismal evening, an unnamed writer in Venice, California, answers a furious pounding at his beachfront bungalow door -- and once again admits a dangerous icon into his life. Constance Rattigan, an aging, once-glamorous Hollywood star, stands soaked and shivering in his foyer, clutching two anonymously delivered Books that have sent her running in fear from something she dares not acknowledge: twin lists of the Tinseltown dead and soon-to-be dead . . . with Constance's name included among them.

And, just as suddenly, she vanishes into the stormy night, leaving the narrator with her macabre "gifts" and an unshakable determination to get to the root of the actress's grand terror.

So begins an odyssey as dark as it is wondrous, as the writer sets off in a broken-down jalopy with his irascible sidekick, Crumley, to sift through the ashes of a bygone Hollywood. But a world that once sparkled with larger- than-life luminaries -- Dietrich, Valentino, Harlow -- is now a graveyard of ghosts and secrets. Each twisted road our heroes travel leads to grim shrines and shattered dreams -- a remote cabin where history is preserved in mountains of yellowed newsprint; a cathedral where sinners hold sway; a forgotten projection booth where the past lives eternally on in an endless loop of cinematic youth and beauty. And always the road turns back to lost filmdom's temple, a fading movie palace called Grauman's Chinese, and to the murky hidden catacombs beneath.

Prepare yourself for a mystery as enthralling as the most well-crafted whodunit; a satire as keen as the edge of a straight razor, a phantasmagoric celebration of a lost world built on equal parts dream and nightmare -- the latest fantastic flight of glorious imagination by Ray Bradbury, the one and only.

Reviews of Let's All Kill Constance

Bradbury takes a page from another literary Ray, Mr. Chandler, then blows his nose on it and hands it to the reader. -- Sam Hurwitt, San Francisco Chronicle

Bradbury has a gift for dialogue, for writing words that bellow, trip, shout and whisper from his characters' mouths. -- Meg Jones, On Wisconsin

With postmodern panache, Bradbury draws attention to the fact that we are reading fiction, composed as much by artifice as by any actual happenings in life. -- Paula Friedman, LA Times

LET'S ALL KILL CONSTANCE is not to be missed. -- Joe Hartlaub, Book Reporter