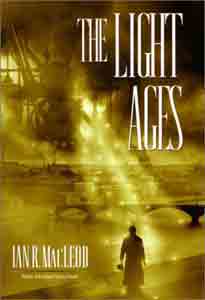 Synopsis of The Light Ages

Aether rules the world. Aether drives the engines, the telegraphs, the very lights of London.

Through the power of aether, and through the secrets and mysteries of the guilds that wield it, England has created a mighty Industrial Age. It is a place of enchanted gardens and grimy terraces, smokestack factories and fantastic beasts. Yet in this great age of the world, Robert Borrows, the insignificant son of a Lesser Toolmaker, holds the key to the world's future.

Raised in the Yorkshire town of Bracebridge, a place dominated by the pounding of mighty subterranean engines, Robert witnesses the dark side of aether when his mother is transformed into a changeling; less than human, terrible to see. Fleeing to London, he re-encounters the beautiful, mercurial and mysterious Anna Winters, who he first met on a trip to a strange white palace in happier times. Roaming the vast, Brobdignagian city, all colours, smells and danger, exploring its myriad social layers, from petty criminals and revolutionaries to salon mistresses and opium dreamers, he discovers secrets that will lead him back towards the clouded hills of Bracebridge and the deepest mysteries of aether. For all is not well in England's green and pleasant land. This Age is ending, in fire and death...

A dazzling melange of Charles Dickens, Mervyn Peake and Edward Rutherfurd, The Light Ages is the story of a time of wonders and delights, mysteries and nightmares. Events both great and small are mirrored in the life of Robert Borrows, an ordinary man born into extraordinary times. Richly detailed, joyous, visionary - World Fantasy Award-winner, Ian R MacLeod, has produced a tour-de-force of imaginative fiction.

Reviews of The Light Ages

Sentence by sentence, this Book is the most well-written you will have read in ages. -- Paul Di Filippo, Scifi.com

MacLeod's imagined social and physical world and the possibility of regime change are more than enough to keep the reader engrossed until the slightly bitter end. -- Gavin J. Grant, Bookpage

A quiet, understated monster of a novel. -- Jon Courtenay Grimwood, The Guardian

...whereas there are many folks who will find this a Book they would enjoy, I would imagine that traditional fantasy fans might not find too great an appeal here -- Steve Mazey, The Alien Online

A strikingly different novel, and one that should be on the awards shortlists come next spring. -- Keith Brooke, Infinity Plus

The six year wait for a new Book by Ian MacLeod has more than paid off. -- Gabe Mesa, SF Site