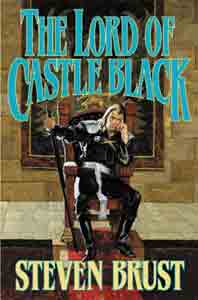 The Lord of Castle Black (Viscount of Adrilankha, Book 2)

Synopsis of The Lord of Castle Black (Viscount of Adrilankha, Book 2)

Continuing the swashbuckling epic begun in The Paths of the Dead

Journeys! Intrigues! Sword fights! Young persons having adventures! Beloved older characters having adventures, too! Quests! Battles! Romance! Snappy dialogue! Extravagant food! And the missing heir to the Imperial Throne!In the swashbuckling, extravagant manner of The Phoenix Guards, Five Hundred Years After, and The Paths of the Dead, this is an old-fashioned adventure--moving at a twenty-first-century pace.

The Interregnum is over. To everyone's astonishment, Zerika, a very young Phoenix, has coolly emerged from the Paths of the Dead, carrying with her the Orb, which everyone had thought was lost in Adron's Disaster. The Orb is the heart of the Dragaeran Empire, the source of all its magic--and the infallible sign that Zerika is the new Empress.

But not everyone is happy to hear the news. It's been 250 years since Adron's Disaster, and power vacuums never stay that way for long. K...na, a Dragonlord, has been expanding his holdings. He now controls almost half the area that was once the Empire -- in effect, the Empire re-created, with himself on the throne.

Among those opposing him is a young Dragonlord named Morrolan - the same Morrolan familiar to every reader of the Vlad Taltos adventures. Until recently, Morrolan was an orphan raised among Easterners, unaware of his lineage, but it has belatedly come to his attention that he's a high-ranking Dragonlord, and now he means to act like one. And from Sethra Lavode he has received a gift of immense significance and power: Blackwand, a magical artifact in the form of a sword.

He'll find plenty to do with it.

Reviews of The Lord of Castle Black (Viscount of Adrilankha, Book 2)

In short, this reviewer believes there is no coin better spent than in the purchase of this new work by Paarfi (and of any of his Books). Should you seek his work, be sure to look also under the name of Brust, his translator. -- Edward Carmien, SFRevu

I have to admit that I didn't really enjoy Brust's latest offering that much. Oh, sure, it's better than 95% of the Books on my shelves, and I devoured it in a day, but still... -- Dave Kennedy, DKennedy.org

Employing his "Dumas homage" presentation, the reader is both entertained by the story itself and by the humorous narrative of Paarfi the historian. -- R.F. Briggs, Yet Another Book Review Site