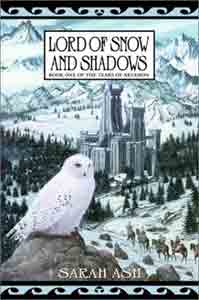 Lord of Snow and Shadows

Synopsis of Lord of Snow and Shadows

The Tears of Artamon

Seemingly always the outsider, Gavril Andar - an impoverished young painter - has yearned to join the privileged circles of Muscobar polite society. However, unbeknownst to him, he does have royal blood in his veins: the dark and powerful blood of a father he never knew - the Drakhaon, ruler of the isolated northern kingdom of Azhkendir. And when the Drakhaon is brutally murdered, an unwilling Gavril is forced to take up the mantle of both his father's rule - and his power. For blood will out. And the Drakhaon's carries within it a taint that gives its bearer access to awesome, unimagined magics - but at a soul-shattering price.

Now trapped in this bleak, mist-shrouded land full of superstition and racked by bitter rivalries, Gavril faces an awesome task. He must find his father's killer and unite his fractured kingdom against those who see it as weak, defenceless and ripe for invasion before he pays the price of kinship and succumbs to the dread curse that uncoils within him . . .

Richly imagined, full of intrigue and dark romance and boasting a cast of superbly-drawn players, Lord of Snow and Shadows is the first Book in a thrilling new trilogy and marks the return of one of fantasy's most original and exciting voices.

Reviews of Lord of Snow and Shadows

Apart from a few niggling inconsistencies... Ash's novel is a frosty infusion of new air into a genre overrun with the usual maidens-with-broadswords clich's. -- Jeremy Pugh, Amazon

This is certainly better than the huge majority of fantasy being published, while not reaching the heights of George R R Martin. -- John Jarrold, The Alien Online

Unfortunately, Ash rushes her complex plot to a choppy ending, fairly skittering between scenes and points of view in her effort to wrap up all loose ends in sight and leaving me wondering what she plans for subsequent novels in the Series. -- EJ McClure, SFRevu

It is a deeply textured read that I found utterly entrancing. -- Cindy Lynn Speer, SF Site