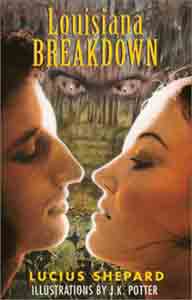 Welcome to Grail, Louisiana! A little hole of a town near the Gulf ... next to nothing and just beyond reality ... where hoodoo meets Jesus and the townsfolk pray to them all.

When there ain't nowhere else to be in Grail, you'll find folks at Miss Sedele's bar, Le Bon Chance ... dancin', shootin' dice, knockin' back beers and those weird green drinks she'll mix up for you called "cryptoverdes." The Chance is the kind of place you just might get lucky in . . .

Then there's Vida Dumars. She's the Midsummer Queen, but her reign ends tomorrow evening. Vida's got the kind of body that turns heads and makes a guy's jaw drop, wishin' he could get himself a piece of that. Vida owns the Moonlight Diner, but she's a strange one. Scares people even. Why she can see right through you, into your deepest heart, as if . . . well, as if you was a picture window. But Vida's got her own secrets ... down deep, dark secrets.

And a new guy arrived in town today, name of Jack Mustaine. His BMW broke down and now he's stuck in Grail for a few days. Jack's one of those singer-songwriters from L.A.; he can bend the strings on that steel guitar and make music that damn near wrenches the soul right outta your gut. But Jack's a man on the run ... though whether he's running from somethin' or running to somethin' even he don't rightly know. Jack hooked up with Vida at Le Bon Chance this evening, so sparks are sure to fly. Vida seen a strength in Jack that even he don't know he got, but is he strong enough to stand against what he and Vida will face in the next twenty-four hours?

You see, a coupla hundred years ago, the founders of Grail made a deal with somebody they called the Good Gray Man. Some kinda spirit that's supposed to be hangin' around these parts. He promised good fortune to the town so long as they kept up the tradition of the Midsummer Queen. So every twenty years, on Midsummer Night's Eve, the town chooses a ten-year-old girl to be the new Queen. She's the luck o' the town. She draws all the bad luck to her so's Grail can prosper. And tomorrow Vida Dumars passes her scepter to the new Midsummer Queen. Tomorrow Vida will no longer be the luck o' the town. Tomorrow the Good Gray Man comes callin'. . . .

Author Lucius Shepard uses the trappings of the dark fantasy story to delve into the psychological and motivational depths of his characters, including the town of Grail itself. Novella Louisiana Breakdown reveals the Author at the peak of his writing prowess ... a tour de force of character, imagery, and tone. With a Foreword by New Orleans Author Poppy Z. Brite; and an Afterword, interior illustrations, endpapers, and wraparound cover art by New Orleans artist J. K. Potter.

Louisiana Breakdown is a slight Book, but a very engaging one. -- John Grant, Infinity Plus

Despite its shortcomings, Louisiana Breakdown is a lovely piece of writing, and attractively bound, with cover art and internal illustrations by J.K. Potter. -- John C. Snider, Scifi Dimensions