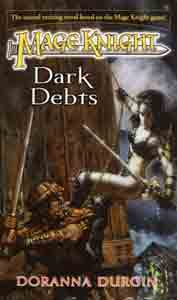 As the dedicated members of the Black Powder Rebels make their move against the Atlantis Guild, chaos spreads throughout the Land. A group of Elves called the Necropolis Sect has devoted itself to mastering the dark arts and raising creatures from the grave. Driven from Atlantis years ago, they have established a hidden city of the dead in the distant Serpine Mountains.

An accomplished assassin from the Necropolis Sect, Kerraii is the mistress to Sarnen, an influential Death Speaker. Indebted to Sarnen for sparing her family, Kerraii belongs entirely to him body and soul. But after being sent into combat against Atlantis, Kerraii is imprisoned as a Magestone miner. While struggling to hide her true identity, she discovers a secret that could mean her freedom from Sarnen's control.

It's a media tie-in. Take it exactly as seriously as that fact demands. But you could do a lot worse. -- Mervius, Fantastica Daily