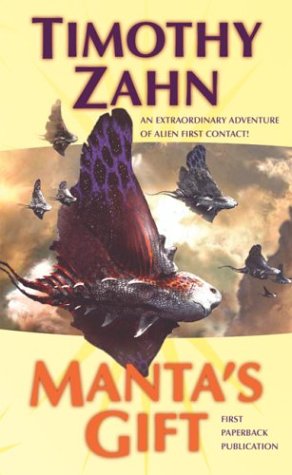 When Matt Raimey had his accident, he thought his life was over. He never dreamed, in his wildest fantasies, that he'd end up in a spot like this. In the toxic atmosphere of Jupiter, born into the body of an enormous creature that looked like a cross between a manta ray and a dolphin, he is living a new life, unlike any humankind had previously experienced.

An unbelievable turn of events, it gave him a reason to live, to survive, no matter what happened . . . but every second chance comes with conditions and responsibilities. And as those who brought him to this strange destiny have their Authority stripped from them and he discovers the truth that only he can know about the giant alien creatures he now calls family, this man reborn as the one they now call Manta suddenly isn't sure he wasn't better off before. . . .

When creative Timothy Zahn goes for all out action, he succeeds with a powerful adventure, but also takes the audience away from the biological debate that makes this a gift to those fans who relish a thinking terse thriller. -- Harriet Klausner, Harriet Klausner's Review Archive

This is a solid, straightforward first-contact/coming-of-age/action-adventure tale, set on Jupiter -- or, more accurately, within Jupiter's thick atmosphere... -- Peter D Tillman, Infinity Plus

This Book was a fun read with excellent characters. -- Shown Rolfe , Yet Another Book Review Site